If you’ve ever visited the museum, you've likely passed by an enormous abstract sculpture called Gwenfritz. After undergoing a massive conservation effort last fall, this remarkable work is back in its original location. 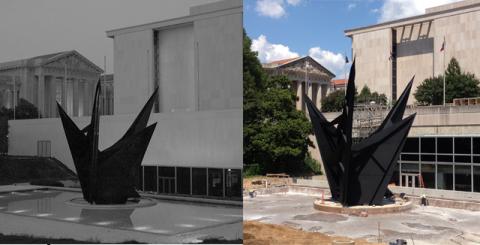 Left: Gwenfritz shortly after its installation in 1969, courtesy of the Smithsonian Institution Archives. Right: The sculpture back in its original location, with construction on the reflecting pool underway, in July 2014.

Just outside the western wall of the museum, 35 tons of metal reach skyward. With its jagged angles and rich, matte paint, this 40-foot tall sculpture creates a commanding presence. Gwenfritz, created by the third-generation American sculptor Alexander Calder in 1968, is returning to its original site-specific location after a recent restoration.

This stabile—a stationary sculptural form, in contrast to Calder’s famous kinetic mobiles commissioned by Washington, D.C., philanthropist Gwendolyn Cafritz for this location at the brand-new Museum of History and Technology (our name until 1980). Although the sculpture has always been a part of the Smithsonian American Art Museum's collections, it is a site-specific sculpture designed to be installed outside the west end of this museum. Fabricated at the Etablissements Biémont foundry in Tours, France, close to where the Pennsylvania-born artist kept a studio, the sculpture was shipped to D.C. in six crates. Smithsonian staff assembled all 71 pieces, secured them with heavy-duty bolts, and applied black paint as recommended by the sculptor before its dedication on June 3, 1969. Sited between the Washington Monument and the museum, the visual impact of the Gwenfritz was made more dramatic, thanks to the reflecting pool that surrounded it. 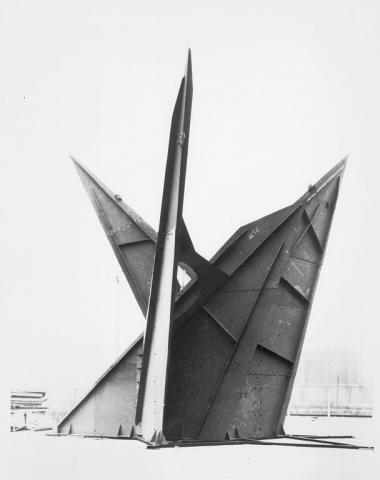 In this archival photo taken before it was sent to D.C., light can be seen streaming through the holes where the bolts will be placed. It was not fully assembled until it reached the National Mall. From the Institutional History Division of the Smithsonian Institution Archives.

By 1984, Calder's sculpture was moved closer to Constitution Avenue to make way for a bandstand between the museum and the National Mall. The stabile remained at this location for 30 years. Last fall, after nearly 45 years of exposure to the elements, this piece of art underwent an extensive conservation treatment. Finally, this month, visitors will once again be able to see Gwenfritz in its original site. (My favorite view is through the windows at the museum's Stars and Stripes cafe.)

Conserving the sculpture in an off-site location required disassembling the massive structure like a three-dimensional jigsaw puzzle, hauling it away in a caravan of trucks, removing three layers of primer and paint, repairing the metal where needed, recoating it with industrial paints, and finally, reassembling it with more than 1,200 new bolts. Because the original paint was lead-based, the conservators had to handle and dispose of it as a hazardous material.

This led the team to understand Calder's work as a feat of engineering. "This conservation project gave us an opportunity to appreciate the engineering behind the sculpture," said Karen Lemmey, Smithsonian American Art Museum's curator of sculpture. "You could see how each part was put together, much in the way that a ship is built. There is a tremendous sense of balance, of design, of precision, of line... and that Calder is able to visualize what this is going to look like from the maquette to the monumental scale."

Left: Calder's scale model shows Gwenfritz on the west side of the museum—which was the case from 1969 to 1983. Right: Gwenfritz visible in an undated photograph. Photos from the Institutional History Division of the Smithsonian Institution Archives (left and right).

The sculpture dramatically changed the face of public art in the nation's capital. Gwenfritz —along with Jose de Rivera's 1967 sculpture Infinity, located just outside the museum's entrance from the National Mall—is one of the first abstract sculptures in D.C. One of its biggest impacts was "heralding a new aesthetic," said Lemmey. In the late 1960s, she explained, "There was a certain degree of predictability in public art, which was not perhaps reflective of the very vibrant arts scene" at that time.

Much like the museum's modern design, which was a certain departure from the standard look of classically-inspired federal buildings, Calder embraced the intersection of science, technology, history, and the arts to create a new aesthetic fitting of that revolutionary time.

Maintaining the stabile's unique appearance was a major concern for Richard Barden, the museum's preservation services manager. "When you're conserving a piece like this—a monumental, abstract sculpture—what we're really preserving is the aesthetic of it, how it looked," he said. "It's a piece of art, so the aesthetics of it—the visual—is important."

Calder suggested that the work should be covered in a matte black paint, which would absorb light and allow viewers to see the interaction between bolts and planes. Barden, who is a sculptor himself, explained that the sculpture's context is hugely influential in regards to light and shadows. Bringing Gwenfritz out from under the trees allows the tones of black to change based on the time of day and season. This more open location also attracts fewer birds and insects, which created nests and left droppings in its previous spot, accelerating damage to the sculpture's surface. 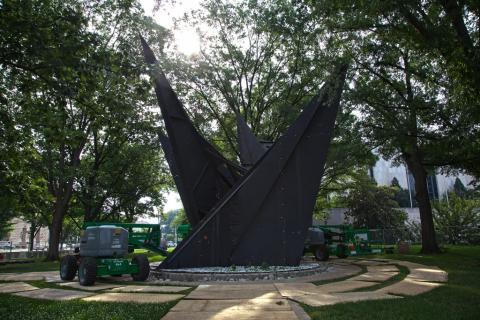 The sculpture in its Constitution Avenue location, under the trees

Barden found that the conservation was so substantial that the effect surprised even him: "The sculpture looks much different than I thought it would. I had no idea how well it would look, or how well the lines, the bolts, and the planes would all interact with each other. I couldn’t tell you that it would end up looking like several shades of black," he said.

Barden, who oversees all preservation initiatives at the museum, said that the Gwenfritz conservation is the tallest, widest, and heaviest project he has seen in his 22 years here. His staff of four conserves a wide range of artifacts in three labs: Objects, Paper, and Costumes/Textiles. The team has spent a significant amount of time researching how this piece was originally assembled: "In order to conserve an artifact, whatever it is, you have to know how it's made. You have to know what it's made of, how they make the materials, how the manufacture of the materials affects the structure of that object, and then what the environment does to it," he said. 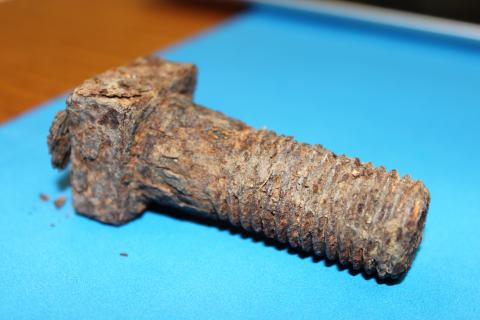 One of more than 1,200 bolts replaced during the conservation process, which stabilized corroded metal and replaced lead-based paint with a formula developed by the U.S. Army Research Lab and the National Gallery of Art. The restoration of the Gwenfritz is made possible with generous support from The Morris and Gwendolyn Cafritz Foundation, with additional support from Donna and Marvin Schwartz.

Throughout the conservation process, Barden has made a conscious effort to maintain detailed records for future conservators. Although they do not anticipate another large-scale restoration effort for many more years, keeping track of the steps they've taken will no doubt assure that future maintenance is done correctly. Almost half a century after Calder unveiled this stabile as a modern complement to the Washington Monument, Gwenfritz has returned to its original location looking like new. 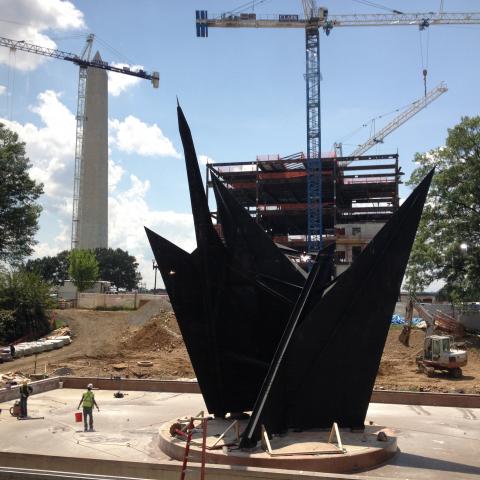 The reflecting pool when the sculpture was originally installed in 1969 was four feet deep. Construction crews added 132 cubic yards of concrete over the summer so that the pool's new depth will be 18 inches. In this view from the museum's west wing—set to open in summer 2015— construction takes place on the new National Museum of African American History and Culture behind Gwenfritz.

For more pictures of the Gwenfritz, check out the Flickr album. Gwenfritz will be officially re-dedicated on October 31, 2014. Auni Gelles interned in the New Media office over the summer.

Posted in Conservation, Behind the Scenes