A year ago, a visitor to the exhibition The Price of Freedom: Americans at War wrote me that an American advisor’s uniform from the Army of the Republic of Vietnam (ARVN) Airborne Division on display “possibly . . . belonged to my brother.” Through further conversation, the story and the man behind the artifact came to light after almost 50 years. The uniform’s former owner, retired U.S. Army Lieutenant Colonel James K. Redding, explained the background of the uniform. Using some of Redding’s memories, I set out to reconstruct his experience in the heart of one the bloodiest battles of the Vietnam War, the Battle of Hue.

A native of Portsmouth, Ohio, then-First Lieutenant Redding arrived in South Vietnam on January 7, 1968, and was assigned as the assistant American advisor to the 7th Airborne Battalion of the ARVN Airborne Division, commanded by ARVN Major Le Van Ngoc. Known as the “Angels in Red Hats,” the paratroopers of the ARVN Airborne Division represented the elite of the South Vietnamese military, an all-volunteer force with roots dating to the period of French occupation in 1951. Working alongside the senior American advisor, Captain Charles Jackson, Redding found himself immediately immersed in the operations of the battalion. Advisors like Redding used their professional expertise to educate, mentor, and assist their ARVN counterparts in a military training capacity, both on and off the battlefield. During combat operations, American advisors coordinated artillery and close air support either from helicopters or fixed-wing aircraft to support ARVN forces and served as the conduit between the Vietnamese and American militaries.

Unbeknownst to most ARVN and American military forces in late January 1968, the North Vietnamese People’s Army of Vietnam (PAVN) and the communist South Vietnamese Viet Cong were preparing to launch a massive military campaign. This campaign, the “General Offensive, General Uprising,” was timed to coincide with the Vietnamese Lunar New Year, or Tết, and thus became known as the Tet Offensive. The Tet Offensive involved simultaneous attacks on major South Vietnamese cities, provincial capitals, and ARVN and American military bases. Through propaganda and anticipated military successes, the communists hoped to inspire the South Vietnamese people to rise up against their government to force an American withdrawal.

After midnight on January 30, the communist forces commenced a series of attacks throughout South Vietnam. Breaking the Tết holiday ceasefire, the North Vietnamese and Viet Cong forces struck 36 of the 44 provincial capitals, approximately a third of all district towns, five of six autonomous cities, and the South Vietnamese capital of Saigon. In the northern part of the country, the communists managed to seize the Vietnamese city of Hue. Located only 31 miles from the demilitarized zone separating North and South Vietnam, Hue (pronounced “whey”) was South Vietnam’s third-largest city with a population of approximately 140,000. The former imperial capital for the Nguyen Dynasty, the city was dominated by the Citadel, a 19th-century fortress enclosing two square miles of land behind stone walls 26 feet high and three feet thick. Bordered by the waters of the Huong (Perfume) River and an accompanying moat, the Citadel housed about half of the city’s population and could be reached from the air or by eleven bridged gates.

PAVN and Viet Cong forces swept in and seized control of the majority of Hue and the Citadel by morning. One critical compound located in the northeast sector of Citadel managed to hold out. The Mang Ca Garrison, headquarters of the ARVN 1st Infantry Division, commanded by Brigadier General Ngo Quang Truong, used every ARVN member in a desperate fight, including hand-to-hand combat, to beat back the communist assault. Inside the remainder of the Citadel, the communists prepared defensive positions and over the ensuing days began rounding up ARVN personnel, civil servants, political leaders, teachers, international residents, and religious leaders. The U.S. Army’s histories of the battle estimates that more than 3,000 civilians were killed or executed by PAVN and Viet Cong forces over the course of the 25-day battle. The city’s residents did not rise up against the South Vietnamese government, and most took shelter and hid from the PAVN and Viet Cong soldiers.

Redding’s experience in Hue began soon after the city fell. Approximately 10.5 miles north of the city in Thua Thien Province, the ARVN 1st Airborne Task Force, consisting of the 2nd, 7th, and 9th Airborne Battalions, received orders around 4:30 a.m. to move to Hue to relieve the besieged ARVN headquarters. Shouldering their rucksacks, Redding and the 350 members of the battalion marched south down Highway No. 1 accompanied by armored personnel carriers (APC) of the 3rd Troop, 7th ARVN Armored Cavalry commanded by ARVN First Lieutenant Tran Van Minh. Less than 500 yards from the Citadel wall, the battalion ran into a PAVN force twice its size positioned behind a large cemetery along the highway. The lead APC was hit by a rocket-propelled grenade that set the vehicle and its ammunition on fire, killing the eight-man crew. The 7th’s paratroopers then began to take enemy fire from the cemetery to its front.

Ngoc and Minh conferred about a plan of attack. Unable to maneuver with the APCs in the cemetery, due to headstones and burial mounds, the men agreed to have the APCs lay down covering fire while the paratroopers launched a frontal attack on foot. Charging forward in their red berets, the 7th’s troopers made it halfway through the cemetery before being cut down by withering fire. Watching the men drop one by one, Captain Jack Chase, American advisor to the ARVN 3rd Troop, 7th Armored Cavalry, described the attack as something akin to Pickett’s Charge at Gettysburg. Redding survived the initial onslaught and managed to find shelter in a nearby fishpond inside the cemetery. For three hours he hid as PAVN soldiers sat down less than three feet from him, leeches fixing themselves to his legs, chest, and back. At one point an enemy soldier urinated into the pond a foot from Redding but failed to see him. Luck seemed to be on his side, but as Redding was just learning, the Battle of Hue would be a long, bloody affair, and he and his men had not yet entered the Citadel.

Click this link to continue to part two in the series, where you’ll learn what happened to Redding and his fellow soldiers as the Battle of Hue continued. 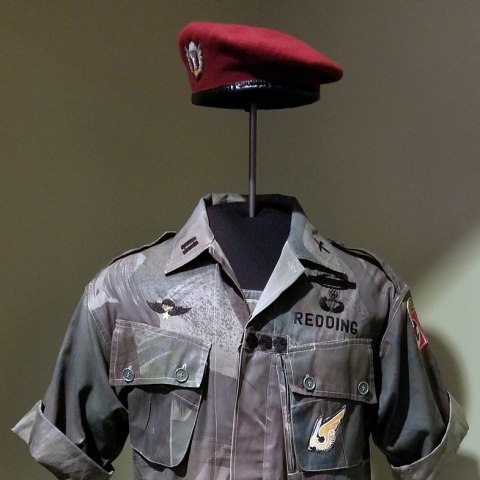