Latin Jazz:La Combinación Perfecta is a Smithsonian Institution Traveling Exhibition Service (SITES) exhibition that explores the rhythms and traditions of Latin jazz. This was a 12-city, five-year tour across the United States and in the Caribbean. 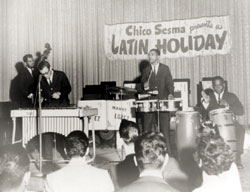 In the words of New Orleans jazz musician Jelly Roll Morton, jazz was born with a "Spanish tinge." In the 19th century, musical traditions from the Caribbean and the United States migrated and mixed, resulting in the emergence of complex new sounds. Percussionists assumed a dramatic new importance, new instruments found their way into the jazz lexicon, and the African heritage of both Caribbean and American music became more pronounced.

In the late 1940s and early 1950s, musicians including Mario Bauza, Dizzy Gillespie, Chano Pozo, and Machito began to fuse jazz with Afro-Cuban music. The result was what Latin Jazz curator Raúl Fernández calls "a hybrid of hybrids."

In New York, the Palladium and Birdland showcased Puerto Rican, Cuban, Panamanian, and Dominican musicians. New Orleans and Los Angeles jazz audiences and musicians also welcomed these new Caribbean influences. In San Francisco, the Beats wove the vocabulary and rhythms of Afro-Cubop into their own work. Meanwhile, the sounds of American jazz spread through the Caribbean.

Latin jazz entices its listeners to move. It invites its audiences to dance. The son, mambo, rumba, and cumbia inspired the rhythms of Latin jazz. These dances have never been more popular than they are today.

Raúl Fernández, professor of social sciences at the University of California at Irvine and an 18-member advisory committee drawn from the international jazz and Latin music community are contributing to the development of Latin jazz.

The exhibition is part of a four-component project which also features suplementary educational materials, a book published by Chronicle, and a CD featuring some of the most influential Latin jazz recordings.

Latin Jazz: La Combinación Perfecta opened to the public on October 17, 2002 at the Smithsonian's Arts and Industries Building. This is the premiere of a 15-city, four-year tour across the United States and in the Caribbean.