Following are a series of activities that explore Benny Carter's musicianship in greater depth. You will need a paper and pencil to complete these activities. 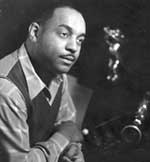 Before Benny Carter, jazz saxophone players tended to play their instruments with a harsh, disconnected attack. In jazz music, it is important for performers to develop a personal, individual sound. Carter was a leader in creating a new style of saxophone playing that featured a smoother, more delicate approach.

Activity: Listen to Carter's alto saxophone solo and list five adjectives that - to you - describe his personal sound and style.

I CAN'T GET STARTED

Benny Carter had the unusual talent of being a versatile and skilled performer on several instruments, including the alto saxophone, soprano saxophone, trumpet, clarinet, and the piano!

Activity: Listen to excerpts from a variety of Benny Carter performances and decide on which instrument he is performing for each of the five solos: clarinet, trumpet, alto saxophone, or soprano saxophone. List the audio excerpt numbers one through four, and write your answer next to each number.

TRUMPET SOLO FROM "TAKE THE 'A' TRAIN"

TRUMPET SOLO FROM "I SURRENDER DEAR" 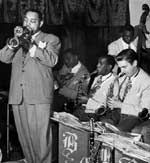 Benny Carter was an innovator not only in the way he played his instruments, but also in the way he arranged and combined the sounds of different instruments when he wrote music. Carter organized the saxophones into a single section, where they all played together as a "chorus." The saxophone chorus would then alternate with a trumpet "chorus." Between choruses, soloists had opportunities to stand out and perform alone. This "call-and-response" technique, pitting section against section, and setting soloist against section work, defined the swing era style.

Activity: Listen to and follow this diagram of Carter's arrangement of Lonesome Nights. The times on the left indicate your location in the piece. 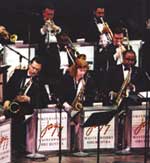 One of Benny Carter's most famous works is Aspects, a jazz calendar with musical pieces representing each of the twelve months of the year. Carter arranged each piece to capture in music the mood and character of each month.

Activity: Listen to excerpts from two months of Aspects - September Song and June is Bustin Out. September is blue and nostalgic, June bursts with energy and life. Listen to each excerpt and decide which month it is. List the audio excerpt numbers one and two, and write your answer next to each number.

JUNE IS BUSTIN OUT 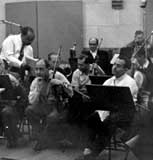 Benny Carter wrote music for both film and television. He also directed television and film orchestras in recordings of his music. His first TV job was creating the background music for a crime show called M Squad.

Activity: Listen to this section of Carter's underscoring for an episode of M Squad, and write the action and dialogue that you imagine might be happening on the television screen.