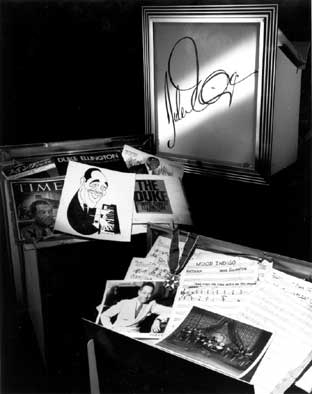 Duke Ellington, the ComposerDaybreak Express is one of Duke Ellington's most original compositions. It provides a vivid picture of a train speeding down the railroad tracks, with its sounds and bouncing rhythms heard and felt in the music. Duke Ellington loved trains, and he and his band spent long hours on them traveling all over the United States. As there was hardly a day he did not write down some musical idea, if only on a piece of scrap paper, he often composed while riding on trains. Daybreak Express is an example of program music, where music is used to describe a non-musical image or event. Use your imagination and pretend you're on the train with Duke and his band!

Activity: In Daybreak Express, Duke Ellington featured trumpeter Cootie Williams and the saxophone section of the band to describe the movement of the train. Follow the outline as you listen to the music and write the words "trumpet" or "saxophones" beside each sentence below.

In some parts of the music, the entire band plays. Did you hear them? Where? 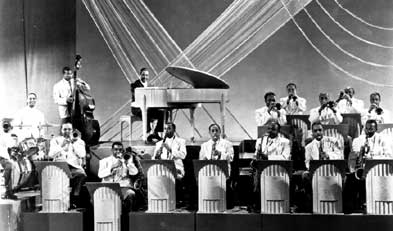 "Ellington managed to create an orchestra that sounded unlike any other. He selected players for their distinctive voices, learned to downplay their weaknesses and emphasize their strengths, wrote to highlight them singly. . .and in various combinations."
--John Edward Hasse, Ellington biographer

Composed by Billy Strayhorn, Take the "A" Train was the theme song of Duke Ellington's band for many years. As you continue to listen to Duke Ellington's orchestra, you will begin to recognize the sounds of his key musicians, each of whom had distinctive ways of playing their instruments. The ensemble was divided into three sections: brass, reeds, and percussion.

TAKE THE "A" TRAIN 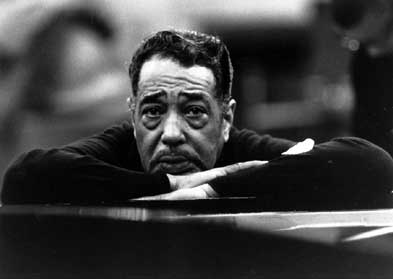 Duke Ellington used the piano in many ways. He would introduce the songs before the band would start to set the mood and the rhythm, or sometimes to call all the members of the band to the stage to get them ready to perform. His introductions could be long or short, but they were always just right for the song that was to be played. One of his most beautiful is the one used to introduce Sophisticated Lady, one of his most popular compositions.

Activity: Follow the introduction to Sophisticated Lady with the guide below: Count the seconds that elapse before the band enters.