In the 1930s, amateur contests were among the most popular attractions at theaters in Ella Fitzgerald's neighborhood of Harlem, NY. At age 16, Ella Fitzgerald and two of her girlfriends wanted to get onstage. They made a bet and drew straws to see which one of them would go on the amateur hour at the Apollo Theater -- Ella drew the short straw! Ella had studied dance and was planning to perform a dance number. Why did she end up singing instead? Because she was so thrown off guard by the success of the two teenaged dancing sisters that performed before she was supposed to go onstage.

Activity: Start with a familiar nursery rhyme such as "Three Blind Mice," or "Hot Cross Buns." Change the words and develop a story. For example:

Can be developed into: 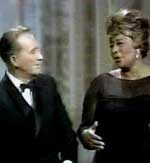 Activity: Again, start with a familiar nursery rhyme such as "Hickory, Dickory Dock" or "Row, Row, Row Your Boat." This time, replace some of the words with scat syllables. For example:

Can be changed to:

Ella never stopped pushing the limits of her singing voice. She had an unusually wide vocal range, able to reach the highest high notes and the lowest low notes. She also had the striking ability to make her voice imitate other instruments.

Activity: Listen as Ella Fitzgerald and trumpeter Roy Eldridge take turns performing musical phrases - he plays the trumpet, and she copies him with her voice. This style of performing is called "call and response." On a piece of paper, use a pencil to trace the melodic curves through high and low as Fitzgerald and the trumpet call and respond. On the left-hand side of your paper, trace the trumpet melody. On the right hand side, trace Fitzgerald's vocal response. Notices how the melodies are shaped similarly in the trumpet and the voice. 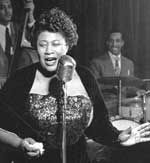 Activity: Ella Fitzgerald's voice was strong enough to perform as an instrument of the orchestra. In this performance of Duke Ellington's Cotton Tail, Fitzgerald takes turns soloing with members of the band. Listen as Fitzgerald begins with a scat, then listen for appearances of the violin, saxophone, and guitar. Write down the instruments in the order in which they appear. Be careful! Toward the end of the piece the solos are so short that they become "call and response."