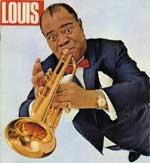 West End Blues is one of the most famous recordings in the history of jazz for the following reasons: 1) Armstrong's introduction showed how dazzling his skills as a trumpeter were; 2) he laid the groundwork for jazz soloists to be considered true artists, the same as musicians in other styles of music and; 3) the recording introduced Earl Hines as the first real jazz pianist, who was Armstrong's equal in creative musical thought.

Activity: Follow the outline below of West End Blues. 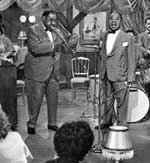 With the addition of a tuba and drum set, the Hot Five became the Hot Seven for a series of recordings. Louis Armstrong was the among first to record improvised solos during what jazz musicians call breaks. A break is a pause in the ongoing rhythm of a composition-as happens several times during the clarinet solo. A related musical practice is stop-time, in which the instruments hit typically just one beat per measure. Potato Head Blues provides an excellent example of how Armstrong's natural sense of rhythm made his solos swing.

Activity: Follow the outline below of Potato Head Blues and count the number of breaks you hear. 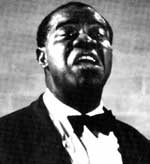 Heebie Jeebies was one of the first jazz recordings to include scat singing. Armstrong departs from some of the words, instead singing rhythmic "nonsense syllables" called "scat." This recording brought scat singing to the public's attention. The "heebie jeebies" was a popular dance when this song was recorded.

Activity: Follow the outline below of Heebie Jeebies. Listen closely to hear exactly when Armstrong departs from the original lyrics and begins to scat, and when he continues with the words of the song. 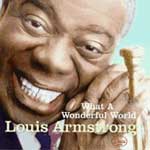 What a Wonderful World was one of Louis Armstrong's favorite songs; he loved it. It is one of the few songs he recorded without playing his trumpet; stringed instruments provide the background music. The song became a hit in England, and became popular in the United States when it was featured in the movie, Good Morning, Vietnam, twenty years later. Louis Armstrong loved children; listen to see if you hear feeling in his voice.

Activity: Follow the words of What a Wonderful World. This song is an excellent example of Louis Armstrong's singing style: sometimes he's right on the beat, sometimes just before the beat, and sometimes just behind the beat. Indicate how he attacks the beat beside the verses of the song. Why do you think it was one of Armstrong's favorite songs? Do you think it could become one of your favorites? Write your own poem describing "A Wonderful World."

What a Wonderful World

I see trees of green,
Red roses too,
I see them bloom
For me and you
And I think to myself
What a wonderful world.

I see skies of blue
And clouds of white,
The bright blessed day
The dark sacred night
And I think to myself
What a wonderful world.

The colors of the rainbow,
So pretty in the sky,
Are also on the faces
Of people going by.
I see friends shaking hands,
Saying "How do you do?"
They're really saying, "I love you."

WHAT A WONDERFUL WORLD