Souvenir Nation: Relics, Keepsakes, and Curios from the National Museum of American History

Before there was a national museum, there was a nation of souvenir hunters—a souvenir nation. The ordinary objects in this exhibit, collected as souvenirs, speak to the ways that Americans once thought to preserve the historical past. Many are bits and pieces broken from larger objects that held intense interest for their collectors, who were among the earliest donors of historical relics to the Smithsonian Institution.

Drawn from the collection of the National Museum of American History, Division of Political History, these objects tend to be unremarkable in appearance. Most would have been lost long ago, if not for the identifying notes that their original owners kept with them. They reflect an urge to connect with history—to literally touch the past, even to go so far as to chip away, cart off, or whittle pieces of that past into pocket-sized bits that gave physical form to the memory of people, places, and events. 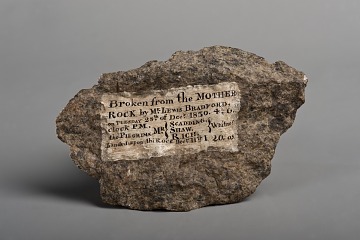 In the early 1800s, tourists visiting Plymouth Rock were provided a hammer so that they could take a piece of the rock as a souvenir. By 1880, what was left of the rock was fenced off within a memorial. 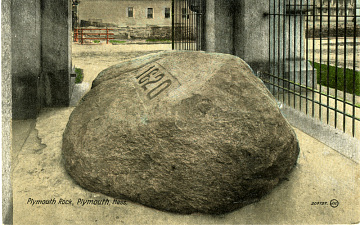