Many of the objects pictured here are often described as relics. But souvenir might be a better description. Their owners collected them in order to connect to a moment in history or a fond memory. These objects were cherished and closely held by the people who eventually donated them. They are typically small—personal items—the kind of thing that easily fits in a pocket or purse. And they are characteristically nondescript—simple objects whose meaning and history would be lost without an explanation.

Broken from the cornerstone of the Washington Monument laid in 1848, this piece of marble belonged to Joseph Meredith Toner, a Washington, D.C., physician, philanthropist, and amateur historian. A collector of all things related to George Washington, Toner led the revival of the commission that oversaw the completion of the monument in 1884.

The 24,500-pound marble cornerstone had been laid on July 4, 1848, before an audience of 15,000 to 20,000 people. Begun by private subscription, the construction came to a halt for lack of funds in the mid-1850s. Not until the nation’s centennial in 1876 did Congress finish what in the intervening years had become a national embarrassment.

The restart began with the construction of a new supporting foundation that covered the cornerstone. Dr. Toner was present when workmen shored up the cornerstone, and he collected a piece of it that broke off in the process. Dr. Toner took great pride in showing it. “I am not a vandal,” he later volunteered to a reporter, who noted that Toner bundled his prize in a gauzy bandage “wrapped around the small chunk of marble as carefully as the swaddling clothes around the ghostly form of an Egyptian mummy.” 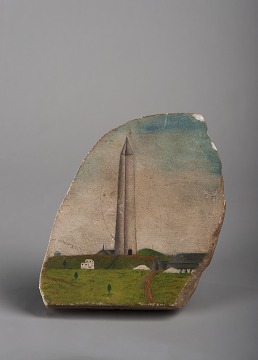