Designed to Be Saved

In the past, the way to document a particular person, place, thing, or fleeting event was to make a painting, portrait, or sculpture. The preservation of the past, and ways of thinking about it, was the domain of art. By the 1820s the production of popular commemorative mementos and keepsakes began to take on the formal functions of art in elaborate civic celebrations, such as those staged for the Marquis de Lafayette and the opening of the Erie Canal.

In the summer of 1917, the Nineteenth Amendment circulated through the states. If approved, it would amend the U.S. Constitution to give women the right to vote. The National Woman’s Party (NWP), the most outspoken proponent of the amendment, sought the support of President Woodrow Wilson. When Wilson refused, the party picketed the White House, an unprecedented political act in its time. Some 89 women activists were arrested and jailed in the city’s workhouse at Occoquan, Virginia. While serving time at Occoquan, Alice Paul, the founder of the NWP, sketched a design for a pin that symbolized the party’s struggle: a jail-cell door with a heart-shaped lock. This pin belonged to Amelia Himes Walker, one of the pickets arrested at the White House, who gave it to the museum in 1960. 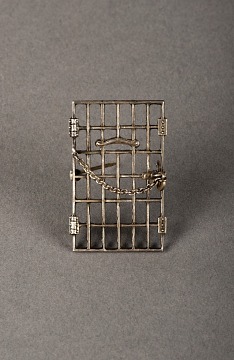