From Relic to Historical Artifact

Museum curators have the task of locating and acquiring objects that make historical statements. The Smithsonian continues to collect relics, though it calls them something else—historical artifacts. The museum responds as it is uniquely qualified to do, alighting on things—and pieces of things—that sum up an event or era. Most recently this visual shorthand has included a concrete fragment of the graffiti-covered Berlin Wall, and the magnifying glass famously used by Florida judge Robert A. Rosenberg in refereeing the 2000 presidential election ballot recount.

Traveling west with his mother in June 1869, eight-year-old Hart F. Farwell stopped at Promontory, Utah, to cut a chip from a special railroad tie. The previous month, on May 10, 1869, the ceremonial “Golden Spike” had been driven into the “last tie” to complete the first transcontinental rail link in the United States.

The joining of east and west by rail at Promontory was a significant event in American life and culture. A national network of iron, steel, and steam, represented by the driving of the Golden Spike, became a unifying metaphor in the years after the Civil War.

But, alas, the railroad tie from which young Farwell cut this chip was not the real “last tie.” After the driving of the Golden Spike, the ceremonial last tie was immediately removed and replaced with a pine tie no different from the others. In the weeks and months following the ceremony, relic hunters whittled replacement ties to bits at the rate of about one tie a week. The wooden chip that Farwell cut from one of these ties was his lifelong possession. 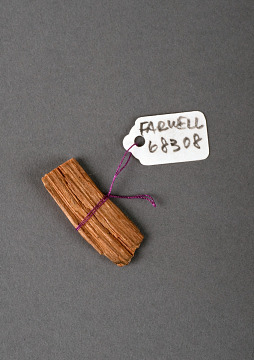 Much of the land on which Washington, D.C., was built originally belonged to David Burnes, who lived in a wood-framed cottage near the present day intersection of 17th and C Streets, N.W. When the location of the Federal city was determined in 1790, President George Washington personally negotiated with the “obstinate Mr. Burnes,” as Washington described him, for the sale of the land. Succumbing to the pressures of development in 1894, Burnes’s cottage was taken down and demolished. Lewis James Matthews, who dismantled it, saved a piece of a rafter that he fashioned into a commemorative “pin dish” of his own design. 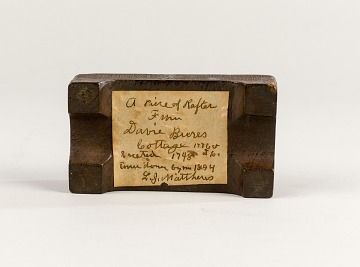 The opening of the Berlin Wall by the East German government on November 9, 1989, signaled the collapse of Communism and led to the reunification of East and West Germany. Their separation through the center of Berlin dated to the Allied partition of the country into occupied zones after the Second World War. When the end came, portions of the wall were cut into memorial-size chunks of concrete. An apparently limitless supply of smaller bits became available to a global audience who had witnessed the wall’s destruction on television. A vendor in a Berlin flea market sold this fragment to a visiting Canadian student, who in turn sold it on an Internet auction site. 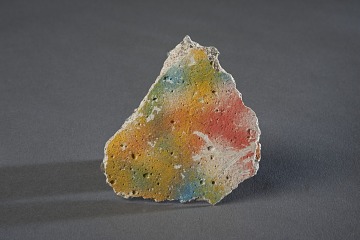 The presidential contest between George W. Bush and Al Gore came down to Florida in November 2000. A confusing ballot design and incomplete punch marks hampered the recount effort, which ground into late November until halted by the Supreme Court.

In Broward County, teams of counters examined each ballot, forwarding cards in need of interpretation to Judge Robert A. Rosenberg. A famous photograph shows Rosenberg peering through a magnifying glass at a ballot and the “chads” (paper fragments) dangling from incomplete punchmarks. This is one of two magnifying glasses that Rosenberg used and kept as souvenirs of the recount, together with a bag of “authentic chads.” 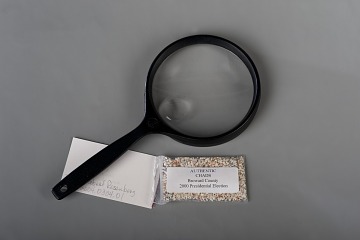 View object record
‹ Designed to Be Saved up The History Collection: Part 1 ›