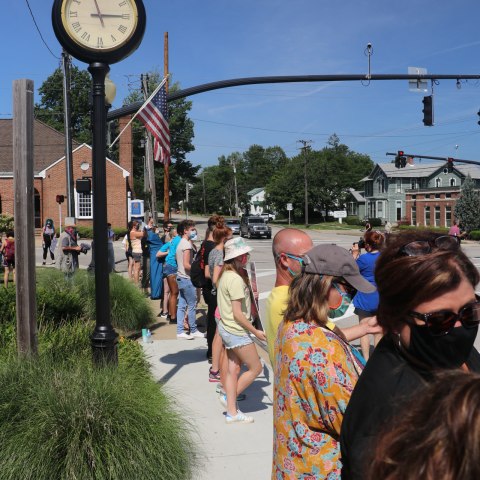 As car after car drove past the green, grown men and women hurled their thoughts, middle fingers and insults at my little sisters - one just about to be 16, the other only 10 years old - as they drew pictures and quotes on the shaded concrete. Nevertheless, they continued to “Chalk the Walk” before the peaceful protest began. Heads, eyes and ears turned away from the passing angry quips that were only setting the tone for what was to come.

The plan was simple. Grab a sign, pick a spot on the sidewalk and stand. This was the center of town, midday with traffic at its busiest - we were bound to make our presence known. I distinctly remember the sound of the flags that hung from the light posts flapping in the wind. The tension in my chest only really seemed to go away when a few of the chants that started up drowned out the sound of them.

Then the other side of the street started filling up. While we stood up, they started a party. Most without masks, they ran up yelling and laughing, greeting each other with hugs. Lawn chairs were set up, stereos were wheeled out, as they took their positions opposite of us.

Conflicting ideological cars began to take notice of all the commotion. A fraction waved to us, a small token of solidarity. The rest began to honk their horns, emphatically proclaim statements like “Trump 2020” out their open windows, and scream insults in similar fashion to the chalk cars earlier - just louder. Before we knew it, the counter-party turned into a rally.

After laughing and jeering, after dancing around and cackling as if the entire concept of it all was some kind of joke, after weaponizing the national anthem so that our knees bled from kneeling on the concrete so many
times, we turned our backs to them. We turned our backs to a side of the community that, quite frankly, I knew existed but had never had to see with my own eyes. I had hoped, hoped for more than anything in my life, that the image my hometown has struggled with had perhaps changed.

I had hoped for anything but this. I can still see the lady with the high, black ponytail, strutting out from the crowd and into the middle of the street, arms raised as she yelled, “but where are all of your black people?”

The only remedy that sliced through the hollow rage I felt building within my heart, was being there to watch my family, my friends and my other neighbors hold their signs high - together - as we kept our backs to the side that was throwing a party in the name of hate-fueled ignorance.