Sweatshops are part of a complex global system of manufacturing and retailing. Garments can be cut in one country, assembled in another, finished in a third, and sold around the world.

Clothing production is a major portion of many nations economies. In 1996, global production of apparel exceeded $200 billion in retail value. About $125 billion is exported between countries, and $75 billion is consumed in the country of origin. The United States produced $49.3 billion (or 25%) of the world total and imported $36.4 billion worth of apparel.

How Do Sweatshops Fit into Global Production?

U.S. sweatshops produce garments — primarily those that require short delivery times — for the domestic market. Sweatshop operators obtain work as subcontractors on other contractors' large orders or on reorders of popular garments that were originally produced elsewhere. These clothes are often indistinguishable from garments produced in legal shops and can be found in stores ranging from discount houses to fashionable boutiques.

It is impossible for shoppers to know the conditions under which their garments were made. Certain types of clothing, such as sportswear, are more often produced in sweatshops than other classes of apparel, such as suits. But every type of garment has been made in sweatshops.

There is no agreement as to the amount of garments sold in the United States today that are produced in sweatshops. Some people estimate that more than 75% of production could be considered sweatshop-produced. Others suggest the actual occurrence of sweatshops represents an insignificant portion of the industry. These estimates vary depending on the perspectives and agendas of those involved.

Today, concerned consumers need to rely on the reputation and statements of manufacturers and retailers to help them assess the origins of their garments.

Maquiladoras—These Mexican and South American factories in free-trade zones produce clothing and other goods exclusively for export. They are based on mass-production principles (i.e., lengthy runs of standardized items that are sold throughout the year, with plant operations designed to accommodate a low-skilled, high turn-over work force). Maquiladoras assemble mostly basic, commodity-like garments (blue jeans, underwear, and work clothes) in direct competition with U.S. plants that face much higher sewing costs.

Trade Barriers—Government policy makers use trade barriers to raise revenue and protect domestic industries. Tariffs are taxes assessed by governments on imported goods. Quotas are numerical limits on the number of items in specific categories that can be imported to a country. 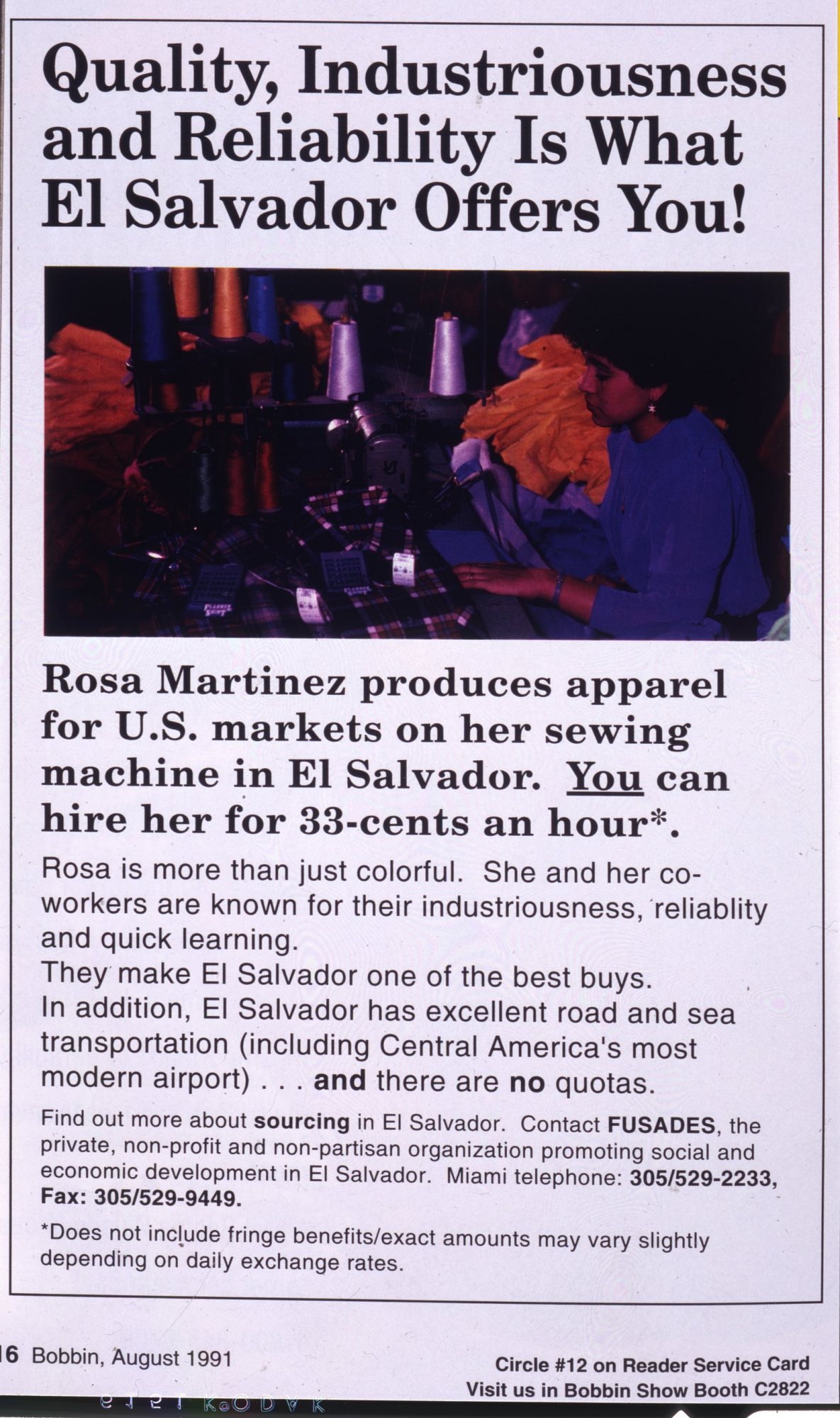 9802—One of the most important exemptions for the American apparel industry is Item 9802 (formerly 807) under the 1989 Harmonized Tariff Schedule of the United States. This U.S. government regulation allows manufacturers to lower production costs by avoiding most tariff taxes while still taking advantage of foreign low-wage production. Under 9802 rules, fabric is cut in the United States, and the pieces are shipped abroad to be assembled. 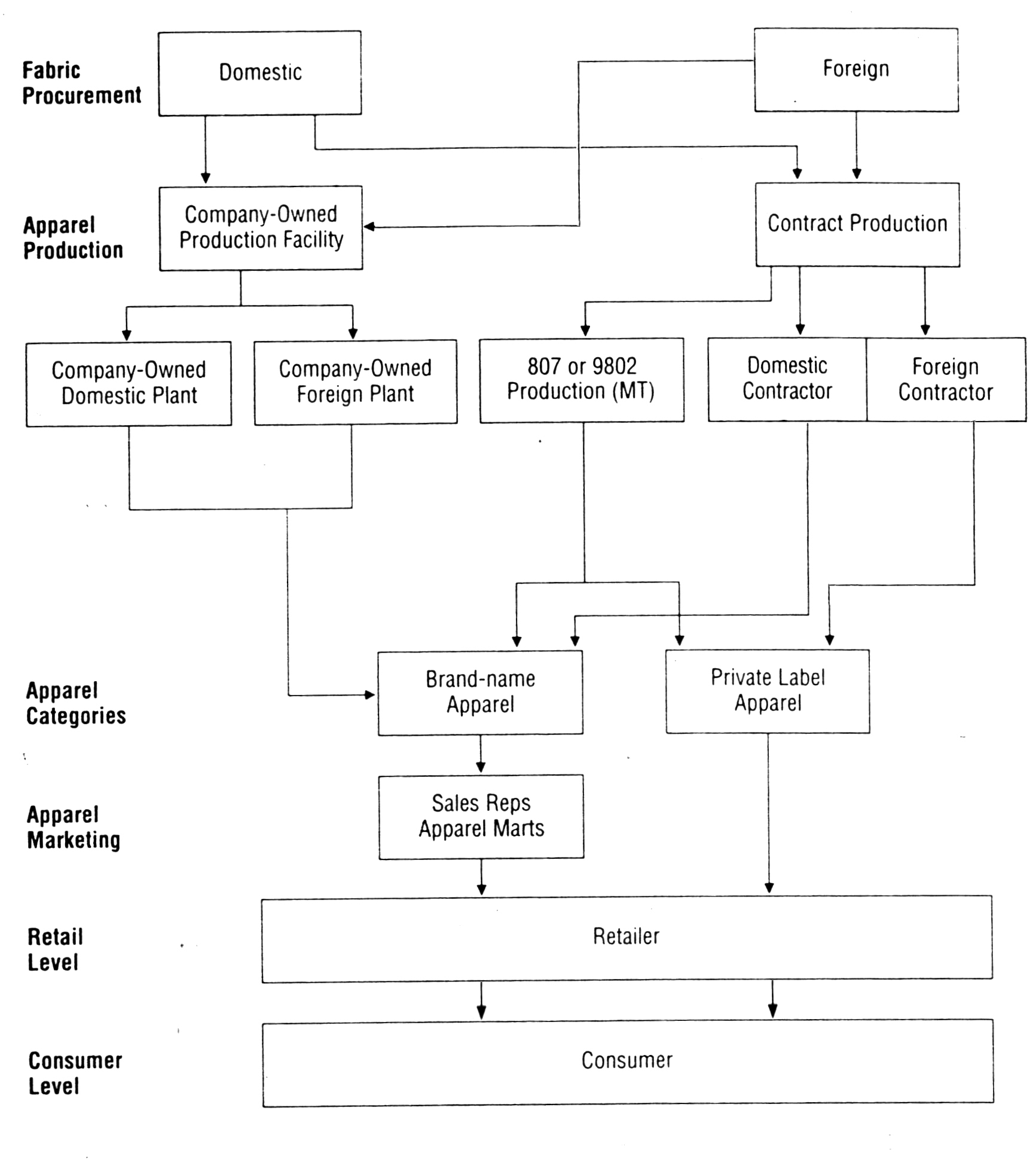 From The Business of Fashion: Designing, Manufacturing, and Marketing by Leslie Davis Burns and Nancy O. Bryant, 1997
‹ El Monte up Viewpoints ›