Impoverished seamstresses were familiar figures in early-19th-century American cities, filling the needs of an expanding garment industry. Working at home, they stitched bundles of pre-cut fabric into clothing worn by Southern slaves, Western miners, and New England gentlemen. Dressmakers were responsible for producing an entire garment and could earn a decent wage. Seamstresses, however, were poorly compensated for work that was both physically demanding and unpredictable. Paid by the piece, seamstresses worked 16 hours a day during the busiest seasons, but their income rarely exceeded bare subsistence. Making matters worse, shop owners were notorious for finding fault with the finished garments and withholding payment. Consequently, seamstresses often relied on charity for their own and their families' survival. 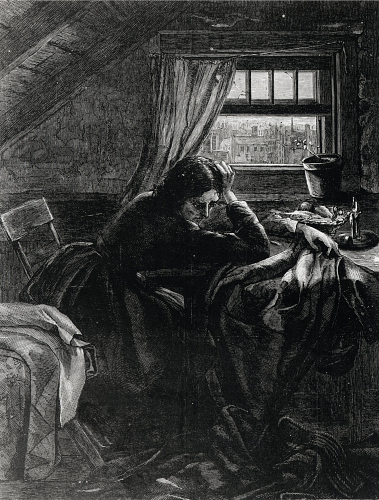 Seamstresses were the daughters, wives, and widows of the working poor from impoverished New England farms and urban working-class communities as well as recent immigrants from Great Britain, Ireland, and Northern Europe. For poor women, employment opportunities were few. Garment sewing was often an act of desperation rather than an occupation of choice.

The manner in which these women lived, the squalidness and unhealthy location and nature of their habitations, the impossibility of providing for any of the slightest recreations or moral or intellectual culture or of educating their children can be easily imagined; but we assure the public that it would require an extremely active imagination to conceive the reality.” — New York Daily Tribune, March 7, 1845

When reformers compared the working conditions of some Northern workers to those of slaves, they often had seamstresses in mind. “If I am less troubled concerning the slavery prevalent in Charleston or New Orleans,” wrote New York newspaper editor Horace Greeley in 1845, “it is because I see so much slavery in New York, which appears to claim my first efforts.”

Most clothing in pre-industrial America was custom-made for a particular individual, either at home or by a tailor or dressmaker. An exception was the so-called slop shop, which produced and sold cheap, ready-made garments for unmarried laborers, sailors on long voyages, and, increasingly after the 1810s, for Southern slaves.

To broaden their markets and keep their workers and equipment busy during slow periods, both slop shops and tailor shops in the 1800s began to produce a full range of ready-to-wear garments for men. This expansion was aided by new technology, a shift in popular taste to looser-fitting fashions that required less precision tailoring, and the growing social acceptability of ready-made clothing.

Although a few articles such as cloaks, corsets, and hoop skirts were commercially produced, most women’s clothing in the mid-19th century was still custom-made at home or by paid dressmakers.

As demand for ready-made clothing increased in the 1820s, shop owners found they could reduce their labor costs by cutting the cloth themselves, farming out the simple sewing tasks to women working at home, and paying them 25 to 50 percent less than male journeymen tailors. This innovation led to the rise of the garment industry sweatshop. 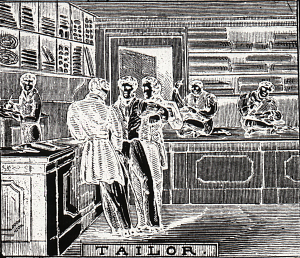 From Panorama of Professions and Trades, 1836. Courtesy SI Library 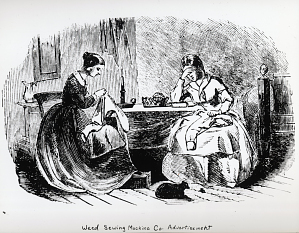 The availability of cheap textiles from New England mills and the Tariff Act of 1816, which taxed imported cotton goods, enabled merchants in Boston, New York, Philadelphia, and Baltimore to seize the profitable “Southern Trade” in slave clothing from British manufacturers. By 1860, two thirds of the ready-to-wear garments made in New York went south.

New inventions and new ways of designing clothing helped the ready-to-wear industry grow. In the early 19th century, tailors began to adopt proportional drafting and sizing systems. These made it possible to standardize the cutting of garment parts, a crucial step in creating mass-produced clothing. 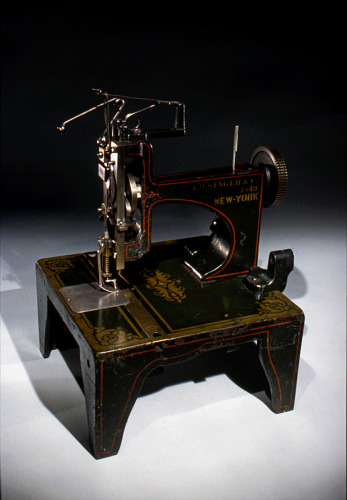 The ready-made clothing industry quickly embraced sewing machines in the 1850s, claiming tremendous time savings over hand sewing. Concerned that the machines would put seamstresses out of work, several reformers urged manufacturers not to use them. It soon became clear, however, that the rapidly expanding industry still required the labor of tens of thousands of workers.

Sewing machine companies offered payment plans to help make their products affordable to seamstresses working at home. Although the machines dramatically enhanced productivity and lowered the price of clothing, they did not greatly increase the earnings of these women.

The ready-to-wear industry expanded during the Civil War. To meet the demand for uniforms, garment manufacturers increased production by building factories and networks of seamstresses. They also developed more efficient production methods and a better understanding of sizing as they prepared to meet consumer demand at war’s end. 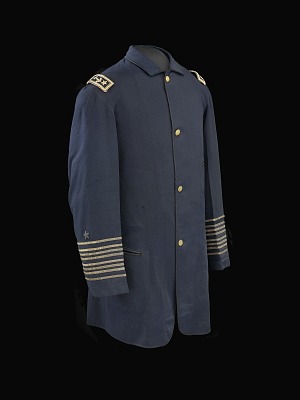 Jackets like this were produced in mass quantities during the Civil War. This particular service jacket was worn by Rear Admiral David G. Farragut while directing the fire of the flagship Hartford during the Battle of Mobile Bay on August 5, 1864.

“You can see them in those shops seated in long rows, crowded together in a hot close atmosphere, working at piecework, 30, 40, 60, or 100 girls crowded together, working at 20 and 25 cents a day.” — Aurora Phelps, seamstress and labor organizer, 1869

Although clothing factories rose in importance during the mid-19th century, most seamstresses worked at home or in very small groups. Sewing in isolation, seamstresses did not establish lasting organizations to advocate for better pay and working conditions, as workers in other industries had started to do. 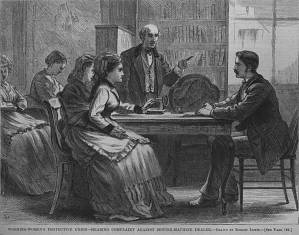 Their numbers and their wants are so great, and the competition so urgent, that they are wholly at the mercy of their employers.” — Matthew Carey, social reformer, 1830 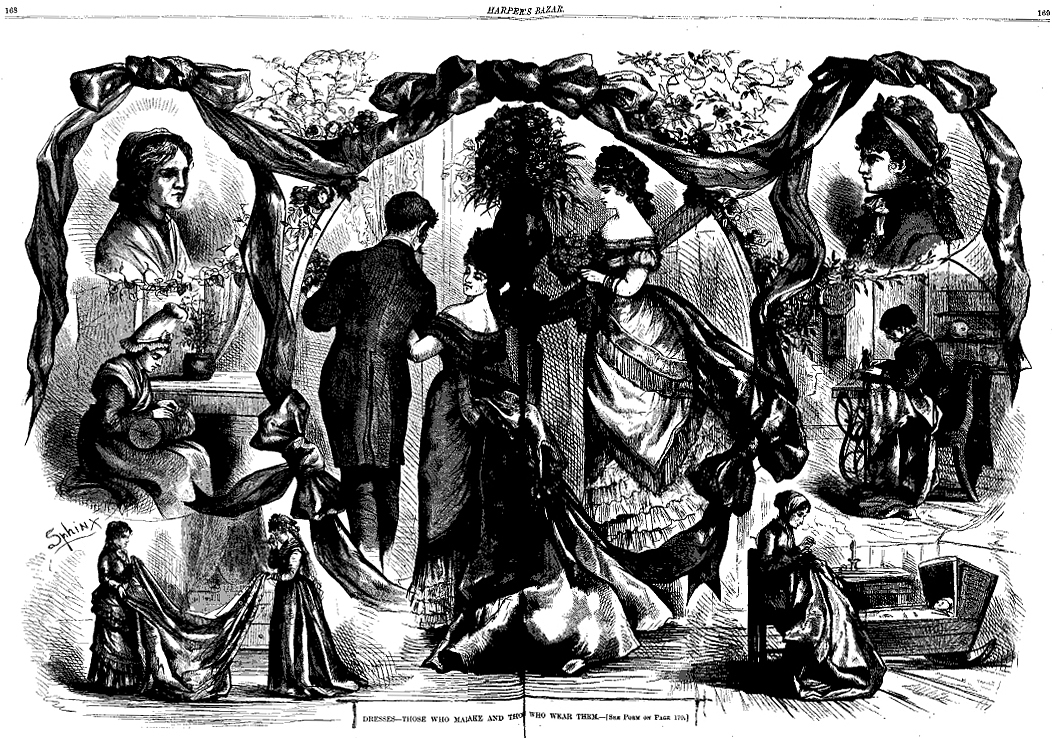 Ah! Beautiful girls, when you fold away Your garments fair, do you ever think Of women haggard and wan and gray Who toil for the barest of meat and drink Of women slender and young like you Who wearily toil the long days through?

Poem and illustration from "Dresses - Those Who Make and Those Who Wear Them," Harper's Bazaar, March 17, 1877

Harper's Bazaar encouraged consumers to take responsibility for the working conditions of the women who made their clothes.