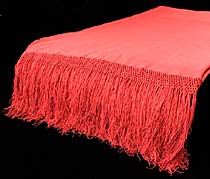 When Susan B. Anthony appeared in public to advocate for voting rights for women, she often wore this red silk shawl—her visual trademark.

Anthony’s father was a Quaker abolitionist. He encouraged his daughter’s education and instilled in her a keen sense of social justice. First active in the temperance movement, she became focused on women’s rights and led a nationwide campaign for a women’s suffrage amendment. This goal was ultimately achieved in 1920, fourteen years after Anthony’s death, a testament to her famous motto: Failure Is Impossible.

As a young woman, Susan B. Anthony worked as a teacher to support her family. This china cup and saucer is from a tea set she purchased for her mother. 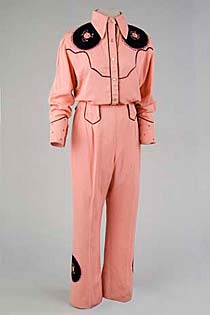 Made for country music star Patsy Cline by her mother, this Western-style performance outfit features record-shaped patches stitched with the titles of Cline’s singles.

Cline began singing with gospel and country bands as a teenager in Virginia. With her 1957 breakout hit “Walkin’ after Midnight,” she became the first female country vocalist to cross over to the pop charts. In 1960, Cline achieved her childhood dream of joining the Grand Ole Opry in Nashville. Three years later, she died in a plane crash. 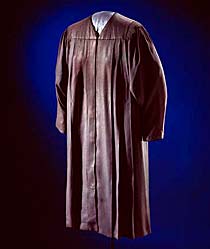 The first female justice on the U.S. Supreme Court, Sandra Day O’Connor, wore this black judicial robe to her swearing-in ceremony on September 25, 1981.

Nominated by President Ronald Reagan, O’Connor developed her legal expertise as an attorney, state senator, and judge in Arizona. As a moderate conservative on the divided Rehnquist Court, she frequently cast deciding votes on controversial issues such as abortion, affirmative action, and the separation of church and state. She retired in 2005.

Presented to Susan B. Anthony when she presided over the first International Council of Women in Washington, D.C., this ivory-headed gavel features the inscription “Order is Heavens first Law.” 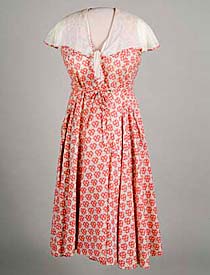 Worn by anthropologist Margaret Mead in Papua New Guinea, this cotton print dress has an adjustable fit to accommodate weight loss in the field.

Mead’s extensive fieldwork in the South Pacific established her as an expert on cultural behavior. Believing anthropology could be a tool for positive social change, she became a celebrity, speaking out on issues such as women’s rights, the nuclear arms race, and the “generation gap,” a term she popularized. 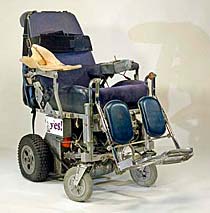 Equipped with a sports-car seat, go-cart wheels, and a top speed of eight miles an hour, this wheelchair belonged to disability-rights pioneer Ed Roberts.

Roberts was paralyzed by polio in 1953, at age fourteen. In 1962 he enrolled at the University of California at Berkeley, where he led efforts to establish a program for disabled students. He later founded the Independent Living Movement, a worldwide campaign to secure civil rights, equal access, and self-sufficiency for people with disabilities. 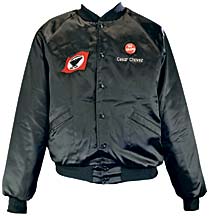 Famed labor activist Cesar Chavez wore this jacket.  As a teenager Chavez experienced the hardships of migrant farm labor in California. The founder and president of the United Farm Workers, he brought the plight of downtrodden agricultural workers to the national consciousness through strikes, marches, boycotts, and fasts. Chavez’s success in community organizing and dedication to nonviolence earned him near-mythic standing as a labor organizer and as an icon of Latino history.
‹ American Biography (page 1 of 5) up American Biography (page 3 of 5) ›