One of the 20th century’s most influential photographers, Richard Avedon created striking portraits of authors, civic leaders, performers, and cultural icons from the 1950s until his death in 2004.

Avedon learned the mechanics of photography in the U.S. Merchant Marine while taking thousands of identification pictures. In 1945 Harper’s Bazaar hired him as a staff photographer. His distinctive fashion and advertising images captivated audiences, but his portraits with stark white backgrounds are among his most memorable works. 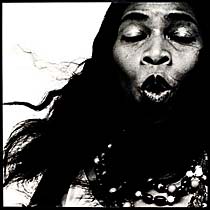 One of the greatest opera singers of her time, Marian Anderson (1897–1993) spent her entire career battling and breaking racial barriers. In 1939, she gave a legendary performance on the steps of the Lincoln Memorial after the Daughters of the American Revolution banned her from performing at Constitution Hall in Washington, D.C.

Avedon photographed the famed contralto at the time of her debut at the Metropolitan Opera House in New York, where she was the first African American to perform as a regular company member. 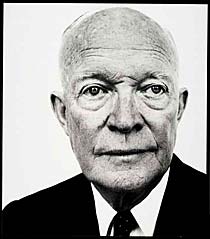 Having demonstrated his leadership as Supreme Commander of the Allied Forces during World War II, Dwight Eisenhower (1890–1969) was elected U.S. president in 1952. With his amiable nature—immortalized by the campaign slogan “I like Ike”—he projected a sense of optimism in a time of great challenges, from escalating cold war tensions, the Korean War, and McCarthyism to labor unrest and school desegregation.

Avedon’s portrait, from a collection titled Nothing Personal, depicted the aged ex-president without his famous smile. 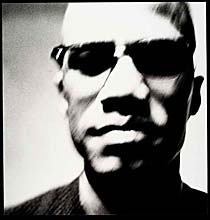 Malcolm X (1925–1965) rose to fame as a leading figure of the separatist Nation of Islam. A militant proponent of black self-reliance, he urged African Americans to unite against white oppression and secure their rights “by any means necessary.” In 1964, he made the pilgrimage to Mecca, where he experienced religious brotherhood that transcended race. In 1965, shortly after he had broken away from the Nation of Islam, Malcolm X was assassinated.

Avedon used camera movement to evoke the emotional energy of his subject. 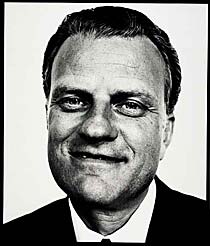 The charismatic evangelist Billy Graham (b. 1918) began preaching in 1938. His national standing grew through tent revivals, radio, and later television broadcasts. He has served as spiritual advisor to many U.S. presidents, from Dwight Eisenhower to George W. Bush. Through his far-reaching crusades, Graham has inspired millions with the evangelical message of salvation through faith rather than good works alone.

Avedon included this unsparing portrait of the world-famous minister in Nothing Personal, a critical look at American society in the mid-1960s.