Expressions of Faith (page 1 of 2)

The Constitution defines the United States as a nation committed to religious toleration. While Americans have often struggled to achieve that ideal, for centuries the promise of religious freedom has been a beacon to many immigrants, and today the United States is one of the most religiously varied countries in the world. These artifacts reflect some of the many expressions of faith that have shaped American history. 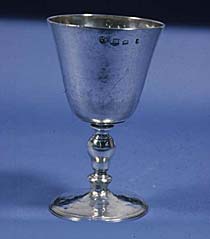 This silver wine cup belonged to Pilgrim leader and Mayflower passenger William Bradford, who governed Plymouth Colony for thirty years. Made for Bradford in London, the cup bears his initials on one side.

The idea of America as a religious refuge originates with the Pilgrims, a group of English separatists who founded a colony at Plymouth, Massachusetts, in 1620. While the Pilgrims sought freedom to practice their own form of Protestantism, they did not tolerate other kinds of worship. 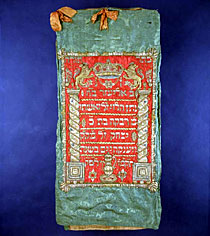 Made in Wenkheim, Germany, this silk Torah mantle was brought to San Francisco by Jewish immigrants during the California gold rush and presented to Congregation Emanu-El.

Founded in 1850, Emanu-El (Hebrew for “God is with us”) was one of the first synagogues in San Francisco. It provided a spiritual and social community for German and central European Jews who came to California in search of economic opportunities and political freedom. 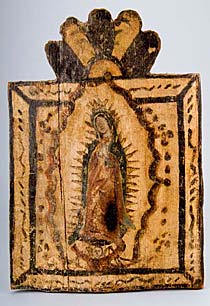 Painted by an anonymous artist in New Mexico, this Catholic devotional image depicts the Virgin Mary as Our Lady of Guadalupe.

According to tradition, the Virgin of Guadalupe first appeared to Juan Diego, a Christian Indian, on a hilltop near Mexico City in 1531. His vision of a dark-haired, brown-skinned Virgin Mary was popularized by Spanish missionaries seeking to convert Indians to Christianity. Over time, Our Lady of Guadalupe became a cherished symbol of Mexican and Latin American identity. 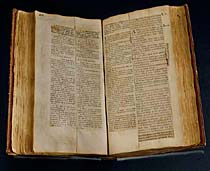 Near the end of his life, Thomas Jefferson clipped verses from the New Testament to create this work, The Life and Morals of Jesus of Nazareth. Reflecting Jefferson’s deist beliefs, the book excludes references to miracles and focuses on Jesus’ moral teachings.

Known as an advocate for a “wall of separation” between church and state, Jefferson believed spirituality was a private matter. But as president, he supported the symbolic role of religion in public life through acts such as attending church services in the Capitol.

‹ American Identity up Expressions of Faith (page 2 of 2) ›