Revolution and the New Nation

In July 1776, the thirteen colonies declared independence from England and created a new nation, the United States of America. They were inspired by revolutionary ideas—equality, liberty, and people’s right to govern themselves—that would guide the future of American society and influence nations around the world. To this day, the struggle to uphold those founding ideals remains our fundamental national challenge. 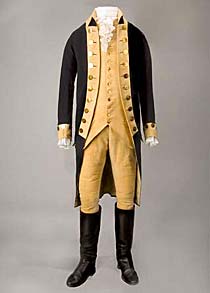 The nation’s first commander in chief wore this general officer’s uniform during his presidency. (George Washington’s coat, waistcoat, and breeches are original; the shirt, neckcloth, and boots are reproductions.)

Washington’s heroic military command during the American Revolution led to his unanimous election as the first U.S. president in 1789. In fulfilling his duties under the newly ratified Constitution, he demonstrated strong and effective leadership and established a precedent for all others to follow. 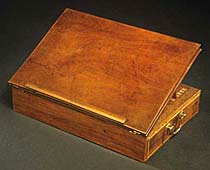 In June 1776, Thomas Jefferson drafted the Declaration of Independence on this mahogany writing box of his own design.

The Declaration asserted the colonists’ right to revolt against English rule by invoking the principles of equality, liberty, and self-government. For Jefferson and his fellow founders, these rights applied only to people like themselves—free white men who owned property. But in proclaiming that “all men are created equal,” the Declaration gave others a basis to claim those rights in the future. 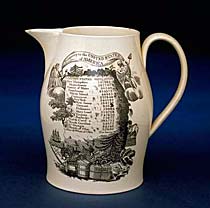 Made in England for the American market, this creamware jug commemorates the first census of the United States taken in 1790.

The Constitution, adopted in 1787, mandated that the population of the states be counted every ten years to ensure proper representation in Congress. The first census, undertaken by U.S. marshals on horseback, recorded 3.9 million inhabitants in these categories: heads of families, free white males sixteen and older, free white males younger than sixteen, free white females, all other free persons (by sex and color), and slaves.

General Washington carried this sword while commanding the Continental army during the War of Independence. In his will, he instructed his heirs to use it only in “self-defense or in the defense of [the] country and its rights.”

In leading his army, Washington regarded himself as a servant of the people, and deferred to the authority of the Continental Congress. He also refused direct pay for his military service (receiving instead money for expenses). After the war ended, Washington surprised those who expected him to seize power; he resigned his commission and returned to private life. 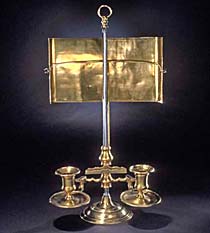 By the light of this brass candelabrum, President Washington worked on his Farewell Address to the nation, which was published in September 1796.

After serving two terms as U.S. president, Washington opted not to seek a third—an example followed by all presidents but one, until term limits were officially imposed. In his Farewell Address, Washington urged Americans to uphold the Constitution and guard against divisive influences that could threaten national unity, including sectional self-interests, party politics, and alliances with foreign governments.