One of the greatest challenges ever to face the United States was the institution of slavery. Violent and inhumane, slavery affected millions of African Americans and created conflict between the North and the South.

While slavery existed as early as 1619 in colonial America, dependence on slave labor in the South did not become widespread until the late 1700s. Under the U.S. Constitution, slaves were defined as property, not citizens, and were given no rights. Slavery in the United States was not banned until the passage of the Constitution’s Thirteenth Amendment in 1865. 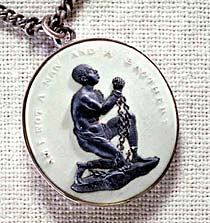 English ceramic manufacturer Josiah Wedgwood was also an active abolitionist. In 1787 he designed this jasperware cameo, featuring a kneeling slave and the motto “Am I not a man and a brother?”

Distributed in both England and the United States, the medallions helped popularize the abolitionist cause. Benjamin Franklin, president of the first American antislavery society, wrote to Wedgwood: “I am persuaded [the medallion] may have an Effect equal to that of the best written Pamphlet in procuring favour to those oppressed people.” 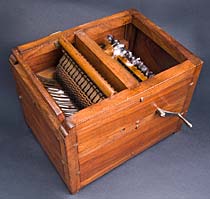 In 1794, Eli Whitney patented a new kind of cotton gin. His invention, using rotating brushes and teeth to remove the seeds from cotton, was quickly copied and improved by others.

Southern plantation owners depended on slaves for labor-intensive crops such as rice, sugar, tobacco, and especially cotton. As the market demand for cotton increased in the early 1800s, the Southern cotton industry expanded dramatically, as did the system of slave labor it relied on. 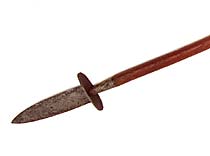 Pike from John Brown’s Raid, 1859
On October 16, 1859, militant abolitionist John Brown and his small group of followers, armed with pikes and guns, seized the federal arsenal at Harpers Ferry, Virginia. Brown hoped to raise an army of freed slaves and invade the South. The plan failed, and Brown was executed for treason. 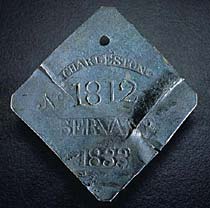 In the early 19th century, the city of Charleston, South Carolina, required slaves to wear identifying tags like this one, marked “Servant.”

Considered property, slaves did not always work for their owners but were sometimes rented out. In a few areas, hired slaves were forced to wear badges lest they be confused with free blacks. 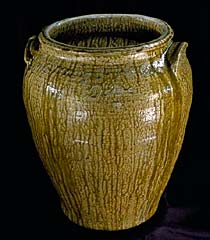 Inscribed by its maker, a slave potter, the poem on this jar reads, “I made this Jar all of cross / If you dont repent, you will be lost.”

A few slaves gained a measure of independence. David Drake, or “Dave,” as he signed his pieces, worked at the Lewis Miles plantation in Edgefield, South Carolina. In a state that outlawed literacy among slaves, Dave defiantly proclaimed his ability to read and write by signing his name and sometimes inscribing poetry on the stoneware vessels he made.