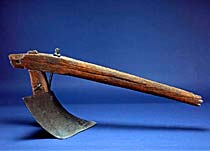 This steel plow, missing its original wooden handles, is the oldest John Deere plow known to exist. Its sharp steel blade cut through the tough, root-filled sod of the Midwest, while its smooth, “self-scouring” moldboard prevented the sticky soil from clogging the plow.

Deere, an Illinois blacksmith, invented his plow in 1837; by 1850, he was producing 1,000 a year. Farmers using plows and other equipment transformed the midwestern prairie into fertile farmland. 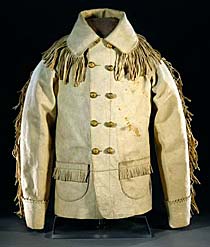 One of the West’s most colorful and controversial figures, George Armstrong Custer wore this buckskin coat while leading the Seventh U.S. Cavalry on the Great Plains.

On an expedition in 1874, Custer confirmed the presence of gold in the Black Hills of what is now South Dakota, a sacred hunting ground on the Lakota Indian reservation. A war over the territory ensued, with Custer leading the charge. On June 25, 1876, Custer’s forces were annihilated at the Battle of Little Bighorn in Montana. But the Lakota victory was short-lived; in 1877, the tribe surrendered the Black Hills to the U.S. government. 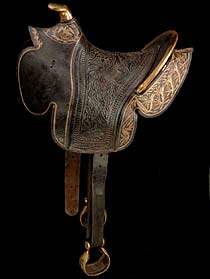 This military saddle, decorated with the Mexican national emblem, was taken as a battle trophy during the Mexican War after the American victory at Cerro Gordo, Mexico.

In 1848, the United States defeated Mexico in a war for control of the southwestern territory from Texas to California. Many Americans hailed the victory as fulfilling their “manifest destiny” to expand across the continent. But expansion also posed new challenges to American democracy, including the extension of slavery and preserving the rights of Mexican citizens living in the ceded territory. 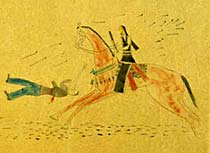 Drawn by a Cheyenne military prisoner, this picture shows a mounted Indian warrior charging toward a line of U.S. troops.

After the Civil War, the U.S. government launched a campaign of invasion, relocation, and extermination against the tribes of the Great Plains to secure western lands for white settlement. By 1890, soldiers had overcome and suppressed armed Indian resistance and forced most tribes onto reservations. Indian artists, working on paper instead of traditional buffalo hides, recorded the bloody battles along with memories of a lost way of life.