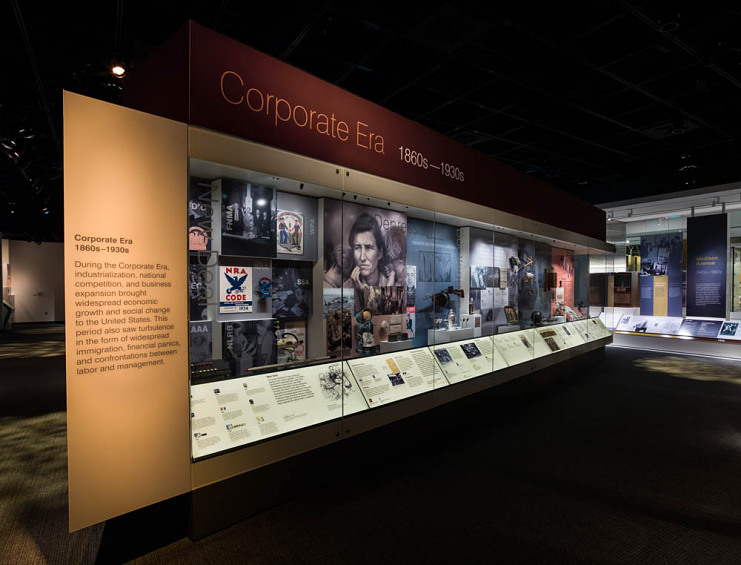 During the Corporate Era, industrialization, national competition, and business expansion brought widespread economic growth and social change to the United States. This period also saw turbulence in the form of widespread immigration, financial panics, and confrontations between labor and management. America became an urban nation, and business got big. While the gap between the rich and the poor grew, the growing middle class earned and consumed more. 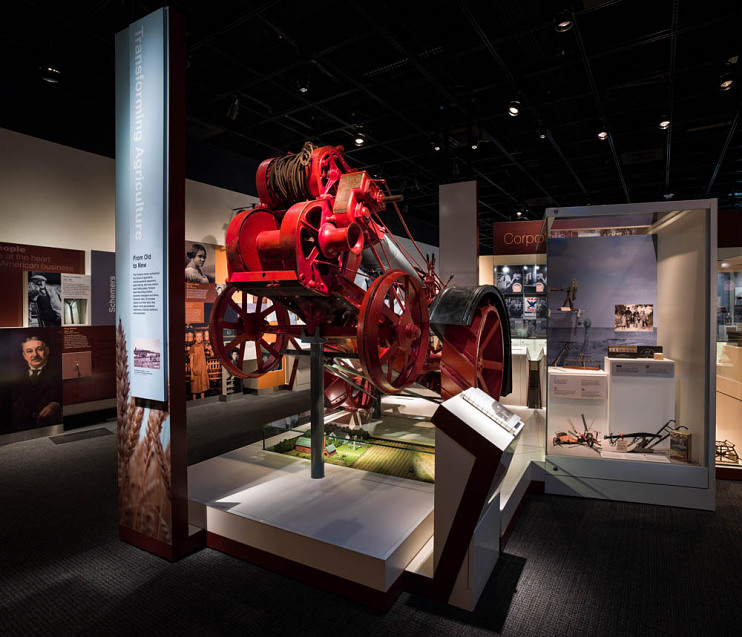 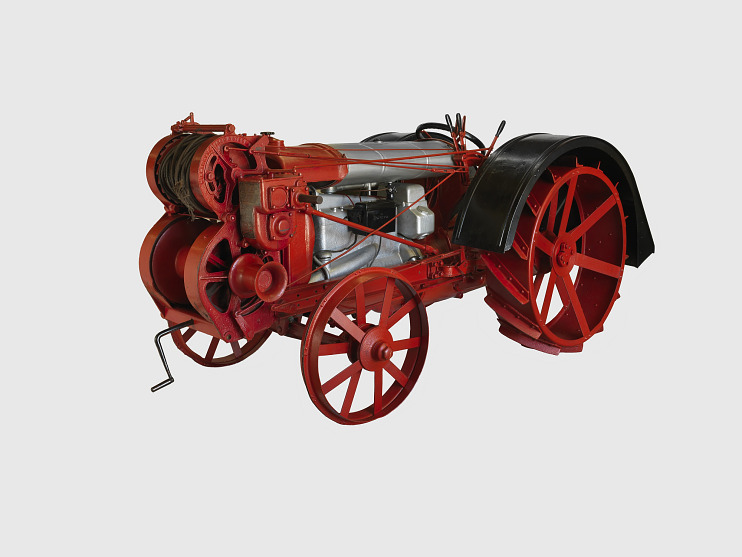 As gas-powered tractors dropped in price, farmers moved away from horse-drawn equipment. Seventy-five percent of tractors purchased in 1923 were Fordsons. However, Ford’s unwillingness to update the tractor led to its failure in 1928.

Continue to the back wall. 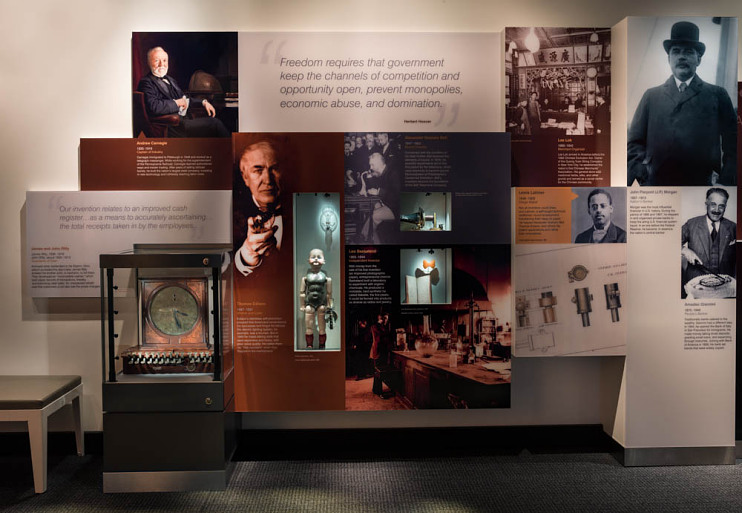 Americans’ propensity to remember success and forget failure, along with Thomas Edison’s relentless self-promotion, helped make him a national invention icon. His electric lighting system of 1879 was a much heralded triumph. But few recall the talking dolls of 1890 that he called his “little monsters.” Expensive and heavy, with poor voice quality, they flopped in the marketplace. 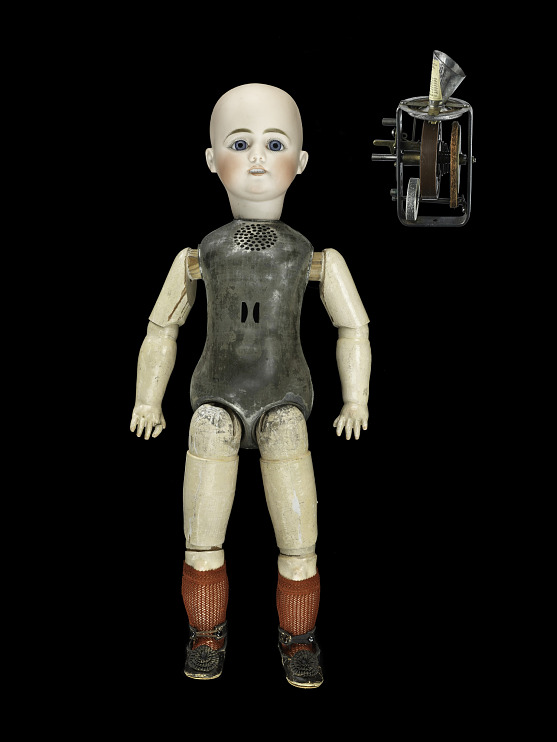 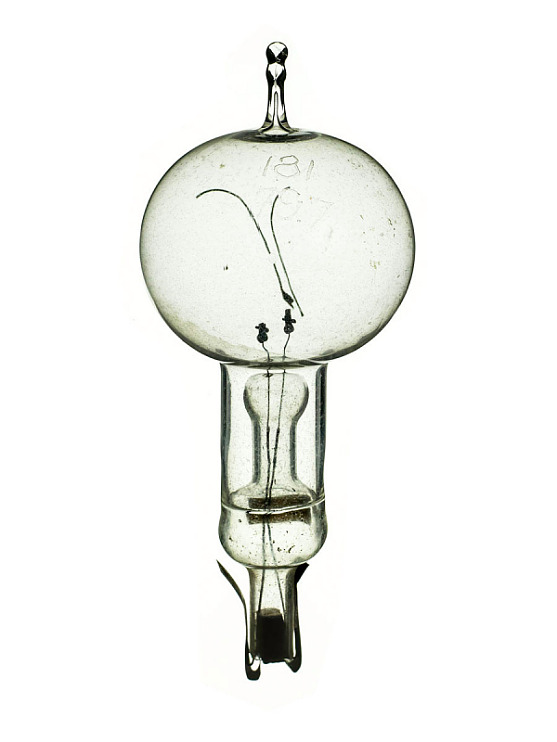 The next stop is to your right. Open the door to see the object! 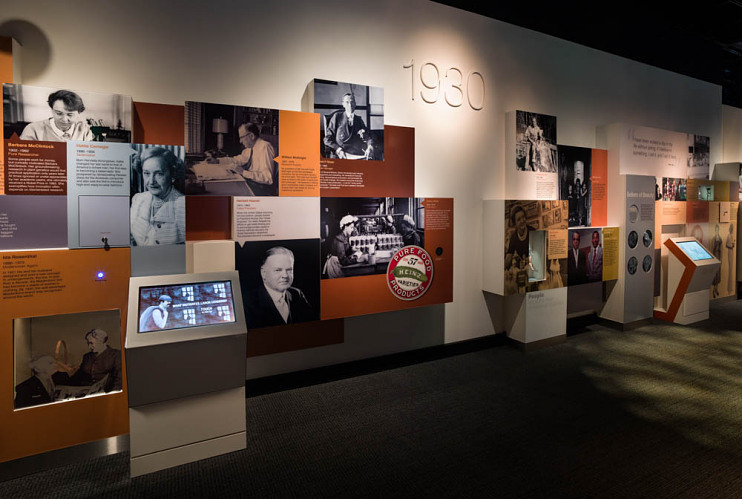 Born Henrietta Kanengeiser, Hattie Carnegie changed her last name to that of America’s richest man, her first step to becoming a tastemaker. She prospered by reinterpreting Parisian dress for the American consumer and also was the first to introduce high-end ready-to-wear fashions. 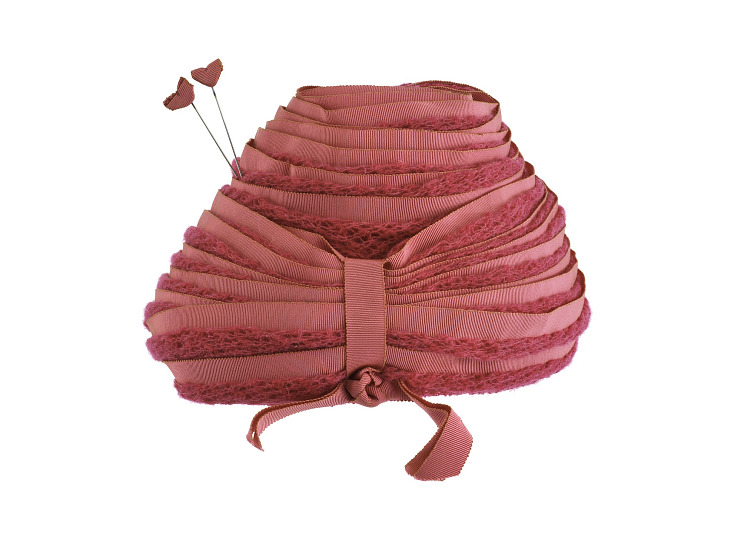 Hat by Hattie Carnegie, about 1950

Hattie Carnegie designed this pink hat in the 1950s. Each annual fashion line from Carnegie contained anywhere from 500 to 1,000 hats.

Turn around. The next stop is down the aisle on your left.

Intended to benefit the common good, Prohibition banned the sale and use of most alcohol from 1920 to 1933. But it did not stop Americans from drinking. Continuing and widespread public desire for alcohol had the unexpected consequence of expanding violent, organized crime. Illegal sources of production and distribution emerged quickly, and mob bosses controlled competition with guns. Crime became big business. 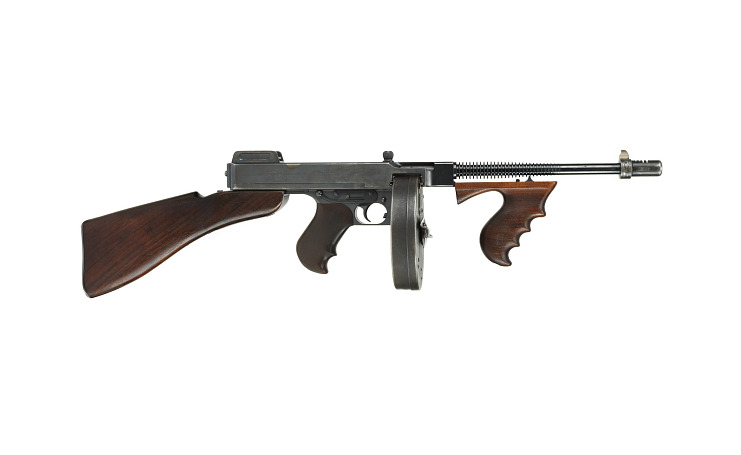 Criminal competition for control of the illegal alcohol market was intense and violent. High-powered weapons like the Thompson submachine gun were a favorite of gang members.

Turn around. The next stop is behind you on the other side of the aisle. 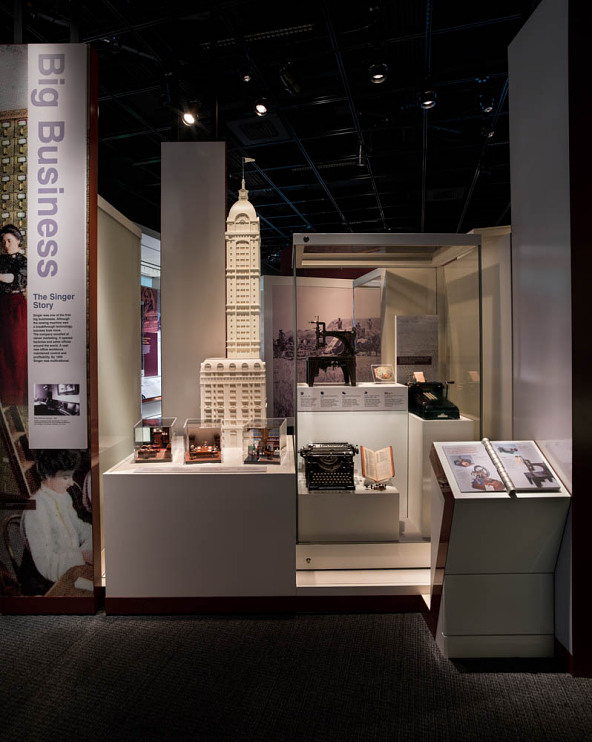 Singer was one of the first big businesses. Although the sewing machine was a breakthrough technology, success took more. The company excelled at clever marketing. It opened factories and sales offices around the world. A vast new office workforce maintained control and profitability. By 1900 Singer was multinational. 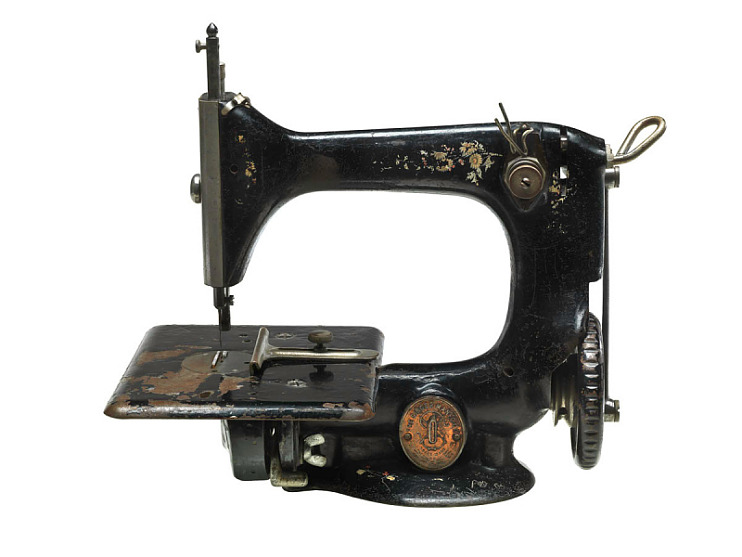 Inventor Isaac Singer patented sewing machine improvements in 1851, but competitors' patents limited the production and sale of the new technology. The Singer company achieved success through innovative marketing, sales, and production techniques. The company sponsored demonstrations at local fairs and in elegant showrooms, developed a home sewing market with a door-to-door sales force, offered customers the opportunity to buy a sewing machine with monthly payment plans, and mass produced the machines in large factories with semi-skilled workers.

The next stop is to your left, along the front wall. 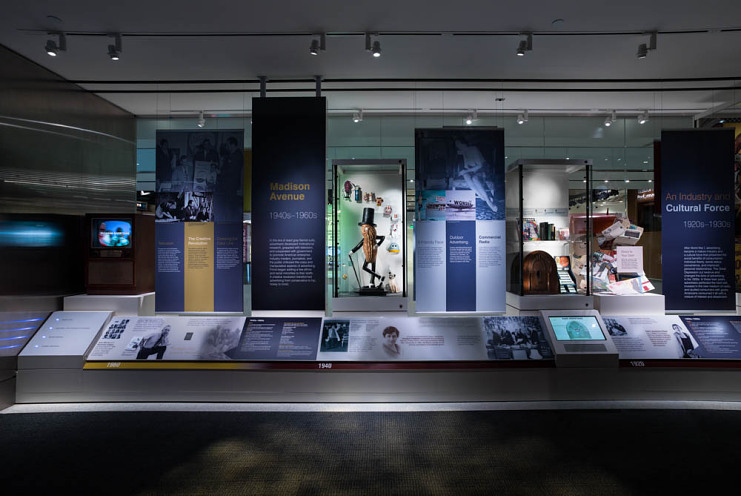 After World War I, advertising became a mature industry and a cultural force that presented the social benefits of consumption: individual liberty, social status, convenience, and improved personal relationships. The Great Depression cut revenue and changed the tone of advertising in the 1930s. In these lean years, advertisers perfected the hard sell, invested in the new medium of radio, and studied consumers with gusto. Americans consumed it all with a mixture of interest and skepticism. 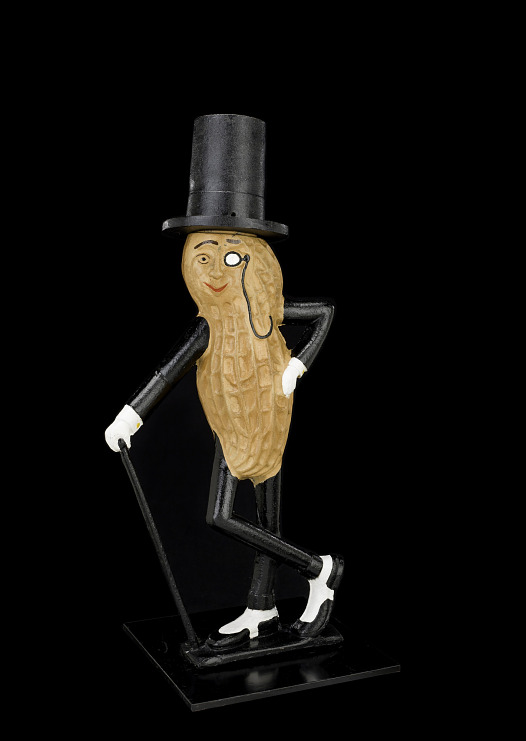 “Spokes characters” became the face of national brands in the 1890s. They pitched all kinds of products and asked consumers to buy based on emotion. As friendly faces, they connected through humor, reached kids, and built brand loyalty. Many became so popular that their parent companies gave copies away as premiums or sold them as licensed products. A few even got their own comic strips, games, and television shows. This is a cast iron figure in the shape of Mr. Peanut, the Planters Nut and Chocolate Company spokes character.

Turn around and walk around the corner into the next section. The next stop is in a case on the right.