The struggle for equal opportunity in sports began long before Title IX became law in 1972. And it continues today as transgender, nonbinary, and cisgender female athletes demand equality.

Where does the fight for fair play in sports go from here?

This exhibition marks the 50th anniversary of Title IX, federal legislation championed by Congresswoman Patsy Mink and signed into law by President Richard Nixon in 1972. The act unintentionally boosted long-standing efforts to open male-dominated arenas of sports. Even as Title IX protections have been expanded over the years—most recently under the Biden administration—athletes continue to face sexism, racism, transphobia, and other forms of bigotry. The stories of athletes before and after Title IX are part of a larger narrative of the struggle for equality in the United States. 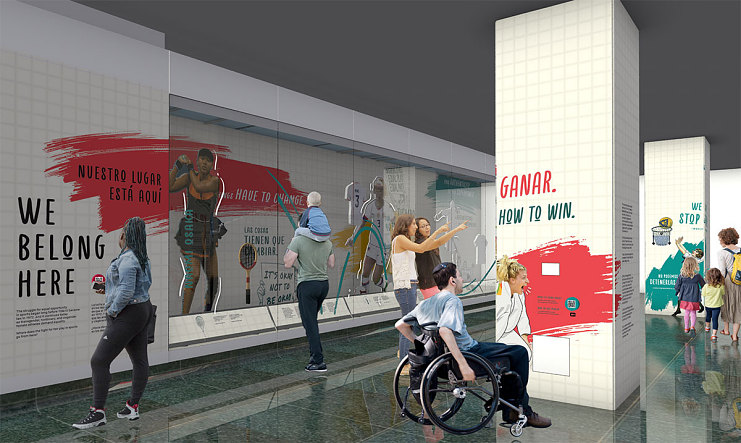 You are presently at the first part of an exhibit that marks the 50th anniversary of Title 9, federal legislation that guaranteed equal opportunity in education regardless of gender. Title 9 led to scholarships and better funding for women’s teams and an increase in the number of women players from 294,000 in the 1970s to 3.4 million today.

To your right is a 30-foot-long display case built into a wall that has a glass face that reaches nearly floor to ceiling.

To the left of the case is the title of the exhibit: We Belong Here. Below that is a label that reads: “The struggle for equal opportunity in sports began long before Title 9 became law in 1972. And it continues today as transgender, nonbinary, and cisgender female athletes demand equality.”

Inside the case on the left is a larger-than-life cut-out photograph of tennis player Naomi Osaka in action. She has her black hair pulled back under a sun visor and is wearing a short black tennis dress with a wide orange collar. Standing upright beside her is her tennis racket that has a silver frame and a white grip. Behind her is a horizontal splash of red—like quickly brushed paint—and a quote from her about the immense psychological pressure athletes endure: “Things have to change.” To the right of the cutout is a sketch showing young women holding signs that read: “It’s okay not to be okay” and “Mental Health Matters.”

In the center of the case is a photo cut-out of Samantha Mewis, a player on the championship U.S. Women’s National Soccer Team. Mewis joined her fellow players in a lawsuit because they were being paid less than lesser performing male players. She has her blond hair in a ponytail and is wearing a white Team USA emblazoned jersey with shorts and knee socks as she controls the ball with her feet. To her left is her jersey, displayed with the back facing forward. It has short sleeves with red and blue bands, her name, Mewis, and her number, 3. To the right of the cutout, a sketch shows a young woman holding a sign that reads: “hashtag She Believes/Equal Play/Equal Pay!” And in a splash of yellow, there is a quote from Mewis about pay equity: “It. Is. Time.”

At the right of the case is a larger-than-life cut-out photograph of Leo Baker, a transgender skateboarder who identifies as nonbinary and presents as masculine. They have closely cropped hair and are wearing a black t-shirt and jeans while performing a flip. To the right of the photo cut out is Baker’s white t-shirt that reads: They/Them. Above the photo is a splash of green and a quote by Baker who encourages other trans and nonbinary athletes to find ways to compete in sports traditionally defined by gender: “Your authenticity is your superpower.” A sketch at the lower right of the case shows a person holding a protest sign with hearts that reads: “Trans rights are human rights.”

Naomi Osaka ›
Many of the objects in this exhibition have been scanned in 3D!

Check them out at Smithsonian 3D Digitization