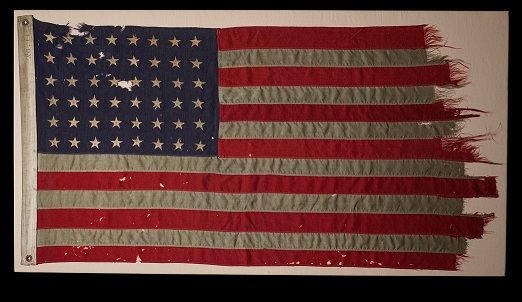 The Smithsonian’s National Museum of American History recently acquired the 48-Star Flag of control vessel Landing Craft, Control 60 (LCC 60) that bore witness to the D-Day landings June 6, 1944. Dutch Collector Bert Kreuk presented the flag to the Smithsonian in a July 18 ceremony at the White House following a meeting between President Donald J. Trump and Prime Minister Mark Rutte of the Netherlands.

The banner serves as a reminder of one of the most important victories claimed by American armed forces and arrives at the National Museum of American History as the nation continues to commemorate the 75th anniversary of D-Day.

The 30-by-57-inch flag flew on LCC 60 off Utah Beach June 6, 1944. The banner features two steel grommets set in a canvas edge and 48 stars representing the states. The banner shows discoloration and staining from diesel exhaust along with general wear and tear sustained during the war-time use. One symmetrical hole in the blue field of the flag is believed to have come from a German machine-gun bullet.

In military use, “D-Day” is an expression from U.S. Army terminology where “D” generally refers to the first day of an operation or attack; it serves as a place holder in the planning phase. Even after an exact time is set, soldiers continue to use the term to prevent unauthorized disclosure. The expression was first used in World War I and is still used today, but it is indelibly linked with Operation Overlord and the naval invasion of Normandy, code-named Neptune. The overall Battle of Normandy, which began June 6, 1944, with one of the largest seaborne invasions in human history and ultimately liberated Western Europe from Nazi control. By 1941, U.S. officials determined that the only option for defeating Nazi Germany was to invade the Western European continent, so planning commenced for an Allied invasion of France. American, Canadian and British forces landed at five beaches code-named Utah, Omaha, Gold, Juno and Sword. For many of the American soldiers involved, the landings at Utah and Omaha beaches would be their first introduction to combat.

On June 6, 1944, Lt. (junior grade) Howard Vander Beek, U.S. Navy Reserve, turned to see “the greatest armada the world had ever known, the greatest it would ever know.” Aboard LCC 60, Vander Beek and his crew found themselves at the helm of history’s greatest war fleet. Composed of 14 men, LCC 60’s crew came from all across America: Sims Gauthier from Moreauville, Louisiana; Ralph Cosden, Baltimore; Jim Hewitt, South Carolina; James Hopfesnberger, Wisconsin; Sophos Lolos, Massachusetts; Stephen Quinn, Connecticut; Joseph St. Germaine, Indianapolis; Joseph Rafaniello and David Schindler, New York; Robert Spencer, Rhode Island; Joseph Tarnowski, New Jersey; Tom Williams, Minneapolis; and Wilford Yokum, California. At nearly 27 years old, Vander Beek was one of the oldest members of the crew, coming from Oskaloosa, Iowa, as a teacher with a Bachelor of Arts in English and speech. Together, LCC 60’s crew guided one of the largest marine invasion forces in history, directing landing craft to the correct sectors of their respective invasion beaches and providing traffic control as ship after ship approached the shore.

LCCs were specialized crafts designed to host specialized equipment that would allow their 14-person crew to receive information via radar and radio transmitters and underwater sound equipment. These vessels, formally known as “Landing Craft, Control,” were a scant 56 feet long with a 13.6-foot beam and with a top speed of a leisurely 13.5 knots.

LCC 60 was the secondary control vessel for the “Tare Green” sector of Utah Beach. When the two control vessels of the adjacent “Uncle Red” sector were knocked out of action, LCC 60 was pressed into primary service. She led the initial waves of landing craft tanks (LCTs) and landing craft, vehicle, personnel (LCVPs) to the line of departure position for the “Uncle Red” sector while concurrently managing her secondary assignments for “Tare Green.” Strong tidal currents, wind and the fog of war caused crafts directed by LCC 60 at “Uncle Red” to land approximately 1,000 to 1,500 yards away from the pre-invasion designated landing zones, but the new site ultimately proved to be a stroke of providence. With fewer obstacles and defenders, the casualties at Utah Beach numbered less than 200 for the entire day.

Vander Beek and LCC 60 would go on to lead another invasion force in southern France, Operation Dragoon. Once again, the 48-star flag flew from the craft’s stern. Months later, when the crew was on a Merchant Marine transport bound for New York City, the flag was neatly folded and remained in the possession of Vander Beek.

After flying on LCC 60 on D-Day and in Operation Dragoon, the 48-star flag was secured by Vander Beek and remained in his possession until his death in August 2014. The flag remained with Vander Beek’s estate until it was consigned to Jackson’s Auction house from Nov. 10–16, 2015. Sold at auction, the consigned flag went to Heritage Auctions, a Texas Arms Militaria and Civil War Auction June 12, 2016. At that point, Kreuk, who felt the need to safeguard this flag for generations to come, purchased it. Kreuk offered the flag as a gift to the American people through a donation to the Smithsonian’s National Museum of American History.

Note: Contact the Office of Communications and Marketing at (202) 633-3129 or at NMAHCommunications@si.edu with any questions.