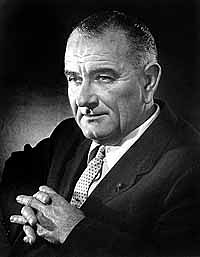 Few individuals have managed to harness the forces of American politics to better advantage or with greater relish than Lyndon B. Johnson. Thus, when he surrendered his position as Senate majority leader to become John Kennedy's Vice President in 1961, it was inevitable that Johnson should bridle at the political limbo of his new office. Johnson's instincts for power, however, survived that limbo. When Kennedy's death put him in the White House in 1963, his ability to get what he wanted was soon yielding a string of landmark legislation that included a far-reaching civil rights act, health insurance for the elderly, and a federally funded "war on poverty." Unfortunately, his administration's war against Communist aggression in Vietnam overshadowed those successes. By the end of his presidency, anger over the war was inspiring protests across the country, and Johnson had gone from being one of the most successful Presidents in history to being one of the most maligned.