Life on the Open Road 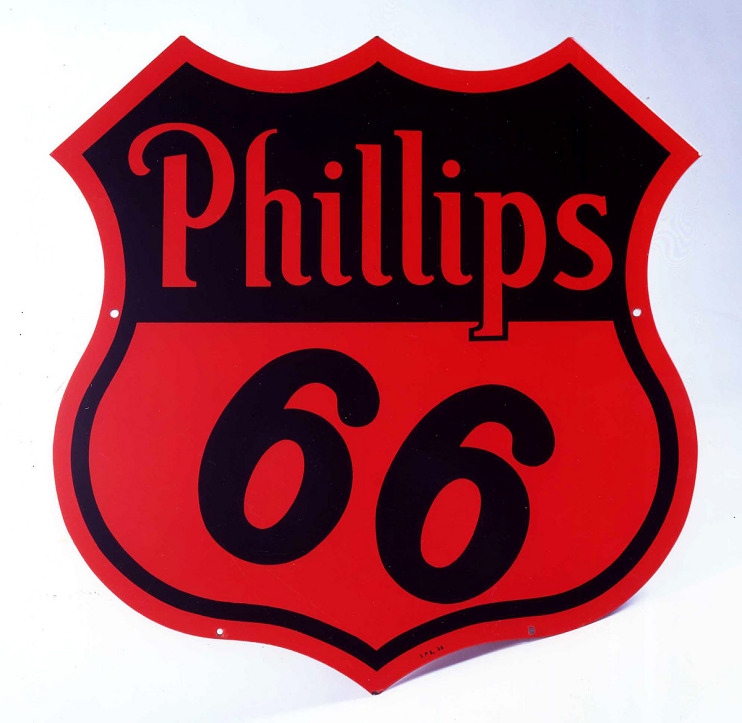 In the 1920s and 1930s, new highways began to affect people’s lives. Some Americans used highways to migrate. Others earned a living on the road, or by its side, running businesses. Many Americans began to take to the highways for pleasure. Travelers often saw the highway as a symbol of independence and freedom, even though they depended on government for the roads they drove on, and on businesses such as automobile and tire manufacturers, oil refiners, gas stations, and roadside restaurants for support.

Route 66 was commissioned in 1926 and fully paved by the late 1930s. It ran from Chicago to Los Angeles, creating connections between hundreds of small towns and providing a trucking route through the Southwest. While not the first long-distance highway, or the most traveled, Route 66 gained fame beyond almost any other road. Dubbed the “Mother Road” by John Steinbeck in The Grapes of Wrath, Route 66 carried hundreds of thousands of Depression-era migrants from the Midwest who went to California hoping for jobs and a better life. 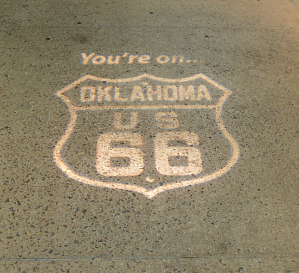 Pavement from Route 66 near Bridgeport, Oklahoma, 1932 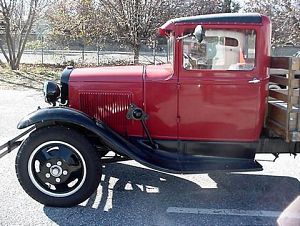 The flat all-season route of U.S. 66 led to an increase in long-distance trucking. By the 1930s, individual truck owners and small fleets carried many types of goods. Farmers also used Route 66, and in the 1940s military traffic and heavy demands on freight trains again increased truck traffic. This truck is similar to ones used on Route 66.

Cyrus Avery: “The most direct road to the Pacific coast”

Like the pioneer days, when they outfitted at St. Louis for all points in the West and Southwest, so today people traveling by auto … find themselves coming to St. Louis over the various U.S. roads, and when arriving in St. Louis, by consulting their map, find U.S. 66 is the most direct road to the Pacific coast and likewise to all points in the great Southwest. “I challenge anyone to show a road of equal length that traverses more scenery, more agricultural wealth, and more mineral wealth than does U.S. 66.”Cyrus Avery

Cyrus Avery, a businessman in Tulsa, Oklahoma, is credited with creating the identity of Route 66. Avery saw the need for better roads through his state, and as chairman of the state highway commission, he helped plan the national system of numbered highways. His proposal for a highway from Chicago to Los Angeles along a southwestern route was approved and designated U.S. 66 in 1926. Avery founded the U.S. 66 Highway Association and coined the route’s nickname, “Main Street of America.” 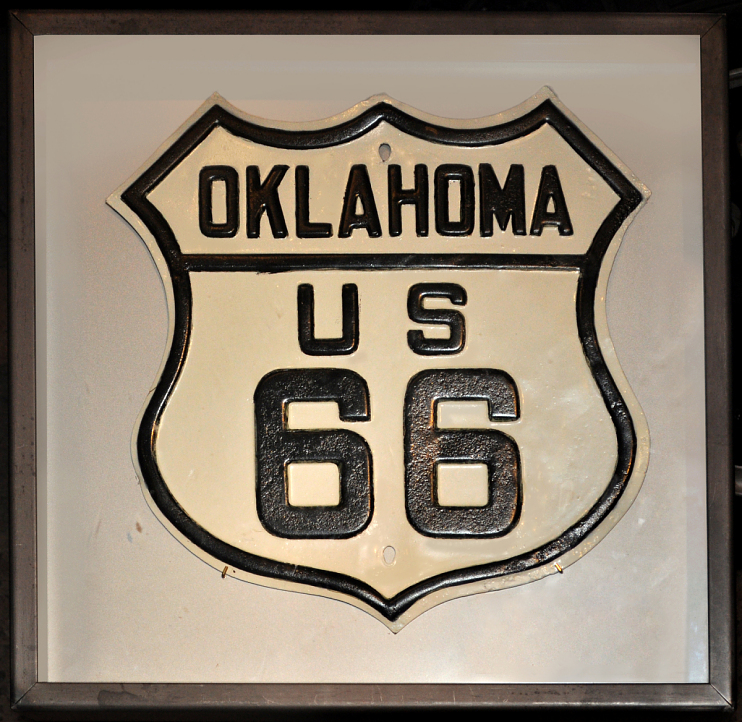 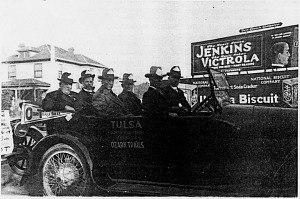 “After Carl got a truck to earn more money, I was alone here to run this place. During this time, people from Arkansas, Missouri, Kansas, and eastern Oklahoma were traveling the road to the West Coast to find jobs. . . . Many times I would have people stop that were completely broke, and I would feed them and give them gas in exchange for some appliance or other articles of value they might have. Sometimes I would just buy their old broke-down cars, and then they would catch the bus and head on west looking for work.” -Lucille Hamons

In 1941 Carl and Lucille Hamons purchased a gasoline station and tourist court on a rural stretch of Route 66 in Provine, Oklahoma. Lucille ran the business and lived there almost 60 years. Her self-reliance and generous assistance to motorists earned her the nickname “Mother of the Mother Road.” 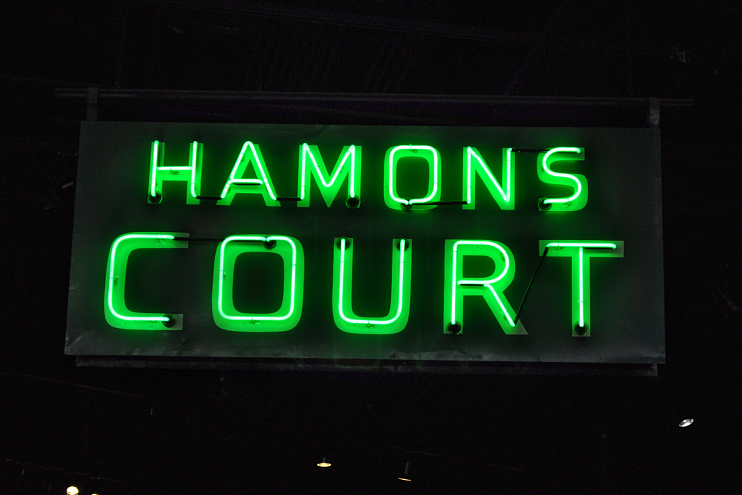 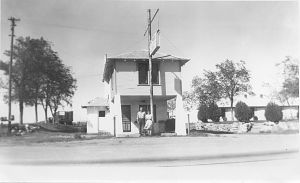 Courtesy of Cheryl Hamons Nowka
Carl and Lucille Hamons at Lucille’s gasoline station on Route 66, 1941. The tourist cabins are in the background. Her family lived upstairs and behind the customer area of the station.
The Haggard family: “Headed west toward California”

Mama and Daddy were making it on a 40-acre farm they had leased.... [After the fire] it was all gone. The barn, the wagon, the plows, the cows, the horses, and Daddy’s prized Model A Ford. He set out to town on foot to get himself another car.... He came back home with a ’26 Chevy and a little homemade trailer bumping along behind. They gave up the lease on the 40 acres, loaded what belongings they had in the trailer, and headed west toward California.” -Merle Haggard,Sing Me Back Home: My Story (1981)

In the 1930s, drought and falling crop prices drove thousands of rural midwestern families to leave their farms and follow Route 66 to California to find work. James F. and Flossie Haggard left Oklahoma in 1935 after a fire destroyed their barn and its contents. The Haggards and their children, Lillian and James Lowell, made their home near Bakersfield, and James found work with the Santa Fe Railway. Another son, Merle, was born in Bakersfield and began his singing career there. By the 1960s Merle Haggard was a country music legend. 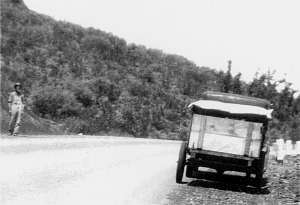 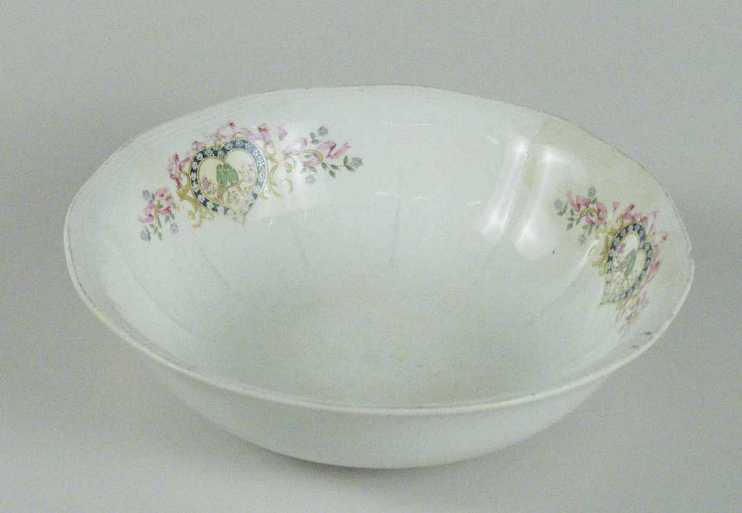 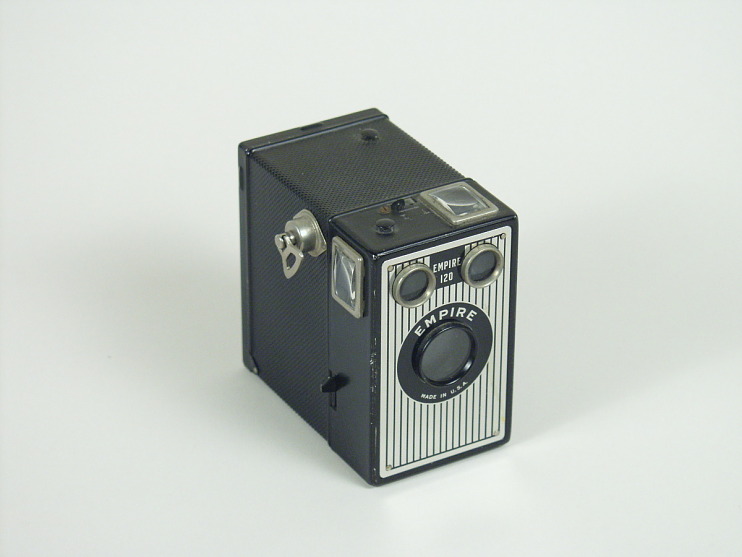 The Haggard family took these possesions with them on their trip from Oklahoma to California. Flossie Haggard used the camera to take pictures of the family during the trip. 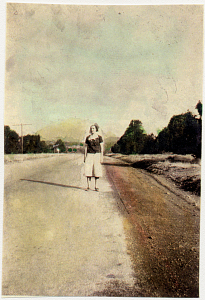 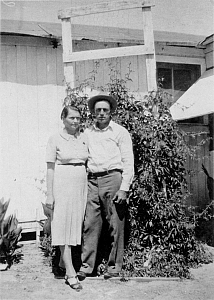 Courtesy of Lillian Haggard Hoge
The Haggards moved from Oklahoma to California with a 1926 Chevrolet sedan and took photographs along the way.

We got to Bakersfield the following Friday. We found a lot with a Santa Fe refrigerator car on it. The owner gave us nine months free rent if we would cut windows and doors in it, and do the plumbing to make a livable place of it. We took advantage of the offer and … added little improvements until it was a cozy little home.” -Flossie Haggard

“Our rest stops were lots of fun”

We made plans to drive from Rochester, New York, to Hermosa Beach, California.…Mary Jane drove her car, I drove mine. Somewhere in Missouri we … crossed some railroad tracks, and my two front tires blew. We had to spend an extra day for repairs.…On the road again, we became aware of a car with four young men doing the same as we. Our rest stops were lots of fun with some boys to talk with. Getting close to Albuquerque, we noticed the reddest soil all around. As we went through Flagstaff the next day, we were treated to a magnificent morning sky.…Thanksgiving Day 1947: the boys headed off to their intended destination, and we girls were welcomed with open arms at my parents’ house in Hermosa Beach.” —Caroline Millbank Short

In November 1947, Caroline Millbank, Janet McDonnel, Ethel May Krockenberger, and Mary Jane Pecora drove from Rochester, New York, to Los Angeles by way of Route 66. One was returning home, two were moving to the West Coast, and one went along for the ride. The journey on Route 66 was a memorable time for all four women: it represented a path to a better future, the way home, and an unforgettable look at the American West. 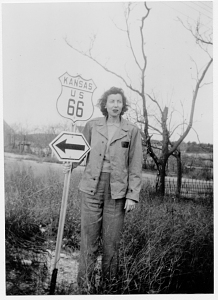 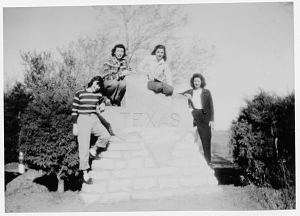 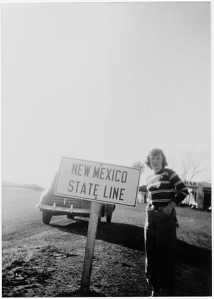 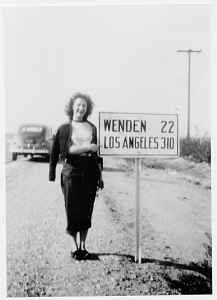 Ethel May Krockenberger in Arizona.

Bobby and Cynthia Troup: “Get your kicks on Route 66”

In 1946 Bobby Troup, an aspiring songwriter and music arranger, drove from Pennsylvania to Los Angeles to advance his career. During the long trip, his wife, Cynthia, suggested that he write a song about highways, and she thought of the rhyme “Get your kicks on Route 66.” Bobby wrote the rest of the words and music as they traveled the famous highway. In Los Angeles he performed the song for Nat King Cole, who made it a hit. The Troups’ song became a monument to long-distance car travel. 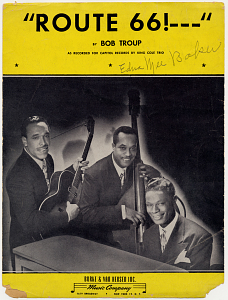 The King Cole Trio, who first recorded Bobby and Cynthia Troup’s musical tribute to the highway, is pictured in the center.

The Delgadillo family: “Playing with bands up and down Route 66”

“During the Great Depression, times became tough and my dad’s business was very poor, and we were just about ready to join the Grapes of Wrath people. Our house was boarded up, and my dad and brothers got our Model T Ford ready, they built a trailer to haul all our things. I was just a little bitty guy, and I was real scared about what was going to happen to us. Then my brothers Juan and Joe got jobs playing with bands and traveling up and down Route 66, and we didn’t have to leave after all.”—Angel Delgadillo Jr.

Angel Delgadillo Sr. arrived in Seligman, Arizona, in 1917 and set up a pool hall and barbershop for the town’s Mexican and Basque populations. In 1926, Route 66 came through town and helped the family prosper. During the Depression, however, the family relied on the children’s musical skills to survive. Juan Delgadillo began playing trombone in the Hank Becker Orchestra. Later his brothers and sisters formed the Delgadillo Orchestra, which traveled Route 66 in Arizona. 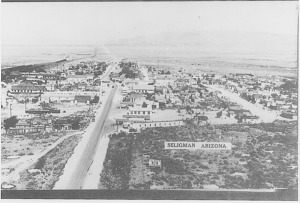 Courtesy of Angel and Vilma Delgadillo Jr.
Before Route 66 came through, Seligman was a railroad town on the Santa Fe line. Angel Delgadillo Sr. worked for the railroad as a laborer and then a skilled worker. Involved in the great 1922 shopmen’s strike, Delgadillo lost his railroad job and opened his own business. His son Angel followed in his footsteps and also became a barber in the town. 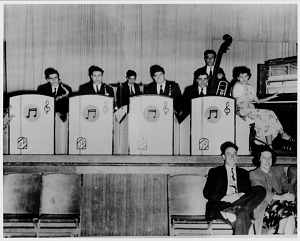 Route 66 crossed parts of New Mexico that had long been tourist attractions. Starting in the early 1900s, the Santa Fe Railway promoted the area to wealthy tourists. Fred Harvey Company car tours (“Indian Detours,” the company called them) opened up more of the region. Tourists came for the natural beauty of the area and for a peek at the “exotic” Indian and Hispanic cultures. Tourists wanted souvenirs, and storeowners and Indian craftspeople were happy to oblige them. The first popular tourist crafts were Navajo weaving and silverwork. 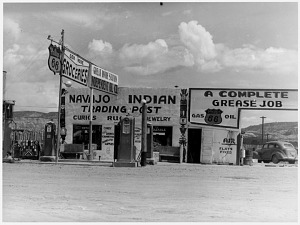 Photograph by Ferenz Fedor, courtesy of Museum of New Mexico, neg. no. 102015
Dozens of small “Indian trading posts” lined Route 66, selling Indian crafts as well as groceries and other goods.
‹ Lives on the Railroad up Roadside Communities ›