Beginning in the mid-1920s, and accelerating after World War II, many grocery stores, car dealerships, and other businesses moved out of the city to the suburban strip. There they created a bustling scene where car-owning consumers could buy almost anything they needed. By moving commercial life out of the central business districts, suburban strips contributed to the economic decline of downtowns. As more people moved into the suburbs, the strips also became centers of social life.

Like many cities that boomed during World War II, Portland, Oregon, developed suburban strips. Lined with stores that appealed to the car-owning middle class, Sandy Boulevard developed rapidly in the late 1940s. In 1949, Wallace Buick moved from its downtown location to Sandy Boulevard, and became one of many auto-related businesses on the strip. Portland residents increasingly shopped on suburban strips like this. Before long, many of them would move from downtown neighborhoods to new suburbs.

Businesses on the Strip

Car ownership brought dramatic changes to American cities. Stores moved from downtown to the edges of cities, where there was more room to park. Shopping and driving merged into a seamless activity on suburban retail strips. 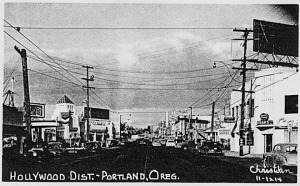 Courtesy of Gerald Risberg
Portland’s Hollywood district had a well-defined “main street” that catered to both motorists and pedestrians. Growing automobile traffic turned this district into a shopping strip with clothing, appliance, furniture, and music stores, car dealerships, restaurants, a theater, and a motel. 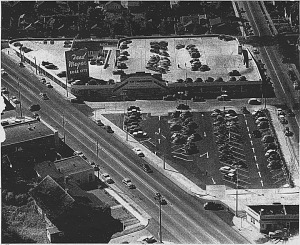 N.E. Sandy Boulevard in Portland, Oregon, was one of the busiest suburban strips in the Pacific Northwest. A major Portland highway, the boulevard was dotted with small stores, gasoline stations, and houses until the late 1940s, when large shopping centers, supermarkets, and car dealerships changed the landscape. These car-friendly businesses attracted shoppers from city and suburbs alike. 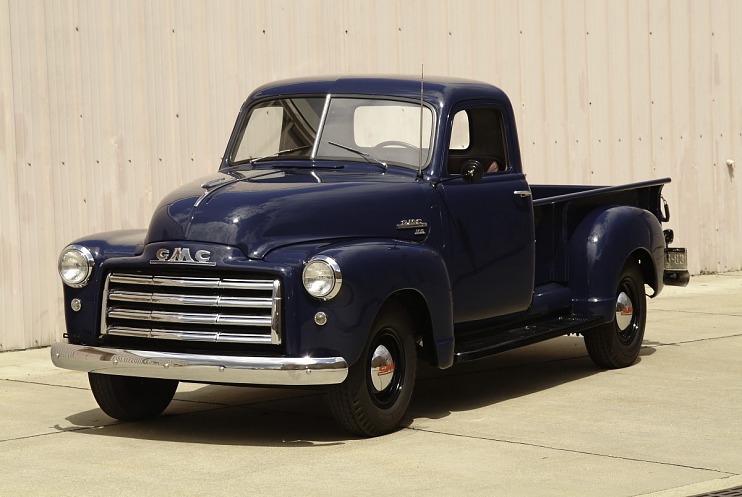 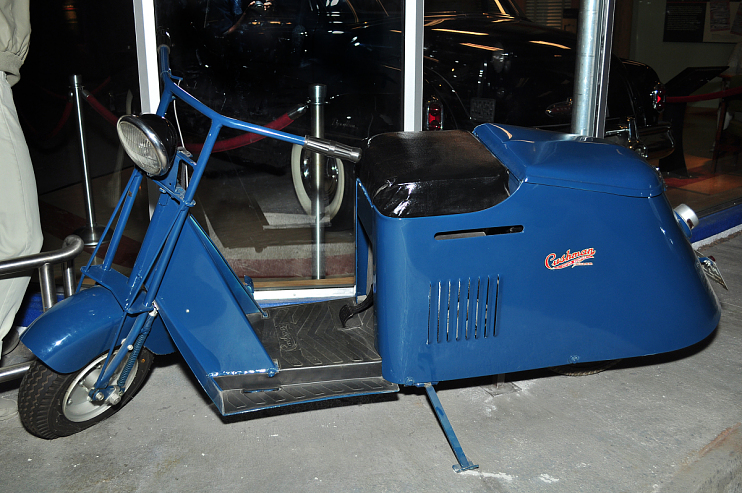 Motor scooters were popular among high school students from the 1930s to the 1950s. They gave young people some of the mobility of the car, and some states did not even require a driver’s license or insurance. Thomas C. Bracco rode this scooter to high school, social activities, and his first job in his hometown of Springfield, Illinois.

“Leave the Driving to Us”

Americans who rode intercity buses in the 1930s and early 1940s were using one of the most convenient, modern, and comfortable forms of motor transportation of the time. Advertisements, movies, and on-board amenities made bus travel seem glamorous and modern. Streamlined design and art deco bus stations added to the allure. During World War II, when car production nearly ceased and gasoline was rationed, bus riding hit its peak. But after 1950, more people drove cars or took a plane to travel long distance. A streamlined bus cruising down the highway no longer heralded the future. In the 1950s, buses had become the way that people who could afford no other means of transportation traveled. 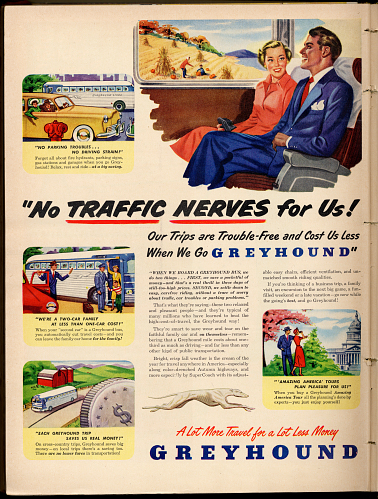 Hot-rodding began before World War II when young men of modest means tinkered with cars to improve their performance. Besides reworking engines, they often lowered the roof or the entire body, to reduce wind resistance. These cars became a symbol of defiant youth, and the basis for more appearance-oriented customizing—gaudy paint jobs and chrome pipes—in the late 1940s and 1950s. Media portrayals of youth culture in the 1950s made icons of these modified vehicles and helped to spread the popularity of customizing. 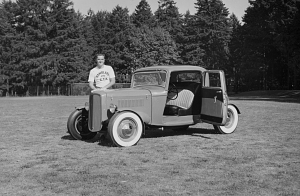 Myles Theberge of Portland, Oregon, modified a 1932 Ford and painted it reddish pink with a chartreuse and black interior. He clocked 90 miles per hour in quarter-mile drag competitions. 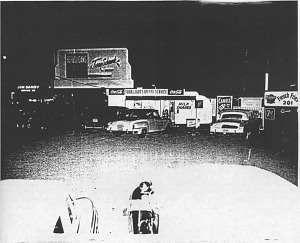 Drive-in on the strip

Courtesy of Vivian Lanegan
Drive-in restaurants, such as the Jim Dandy on Sandy Boulevard, became gathering places for young Portlanders, who increasingly had access to either their parents’ or their own cars. 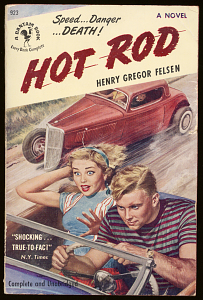 Mass market novels like Hot Rod made the hot-rodding phenomenon seem like a widespread form of youth rebellion. Its lurid cover glamorized speed and mobility even as the content warned of the terrible consequences of dangerous driving. 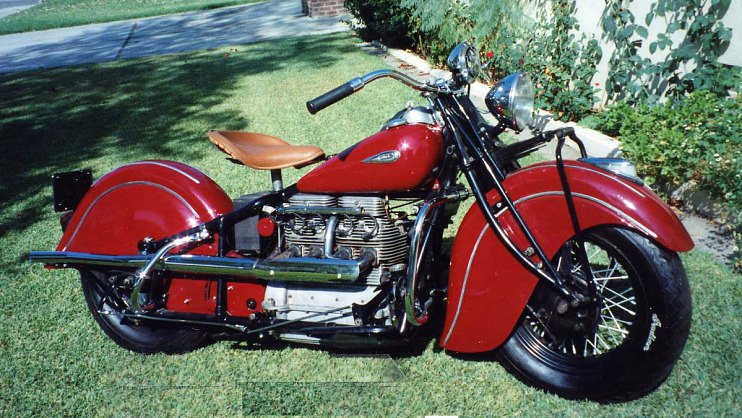 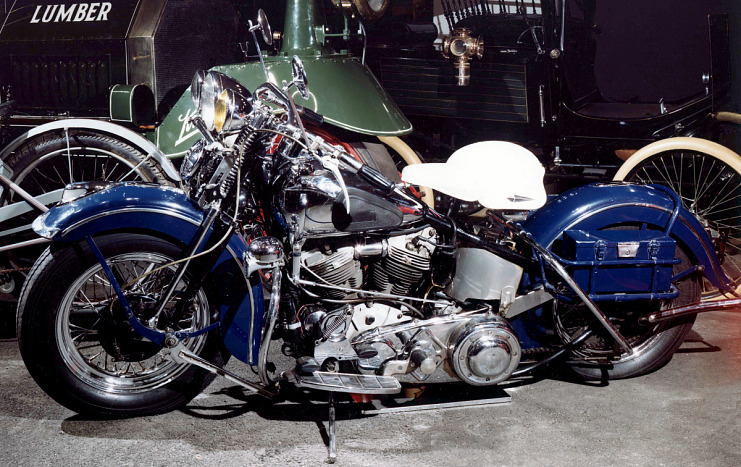 Motorcycle riding and racing were popular after World War II. New and used American models and British imports were much in demand, especially among returning veterans who had ridden motorcycles during the war. Harley-Davidson and Indian brand motorcycles dominated the market in the 1940s.

At the end of World War II, demand for new cars far exceeded the supply, and dealers didn’t need to drum up sales. But as manufacturers introduced new models and production increased, consumers went shopping for new features, exciting styling, and low prices. Dealers hired more salesmen and sent them to automobile factories for training. Experienced salesmen knew how to make their cars appealing, compare them favorably with rival cars, and “close the deal,” sometimes using aggressive sales techniques. In the 1950s, automakers authorized many new dealerships, established quotas for dealer sales, and vigorously advertised their products.

Offering luxury and power at an affordable price, Buick made a strong appeal to middle-class Americans with its Super and Special models. By 1954 Buick was one of the three best-selling cars in America, along with Chevrolet and Ford. 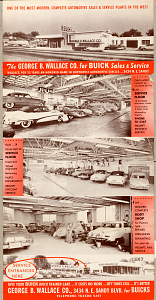 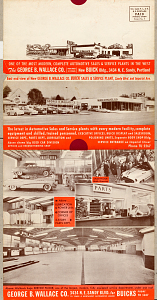 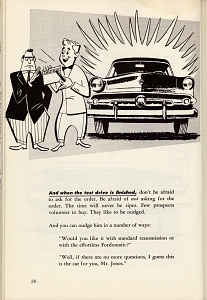 In postwar America, cars were promoted as a reflection of their owners’ status and self-image. Many buyers accepted the idea that the automobile they bought revealed their social standing, level of affluence, and personality. Flamboyant, fresh styling identified followers of fashion and glamour. Station wagons symbolized family life. Sports cars and convertibles had youthful flair. Manufacturers’ advertisements linked cars to ideas about class, style, leisure, wealth, and gender. 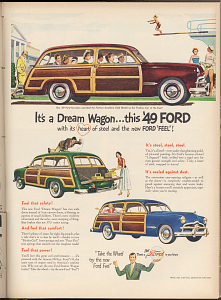 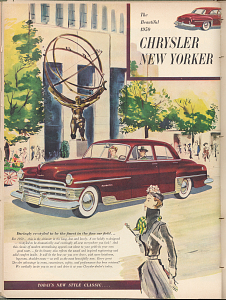 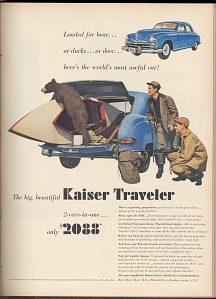 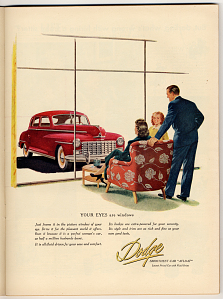 In the 1950s, many people needed a new car when they moved to the suburbs. Many more simply wanted a new car—increasing income nationwide, coupled with persuasive advertising campaigns, fueled demand. Today, most American households have two or more vehicles, including an increasing number of light trucks and sport utility vehicles.
‹ On the School Bus up City and Suburb ›