During World War II, the seamen of the U.S. Merchant Marine suffered a higher casualty rate than any service branch. As many as 9,500 perished at sea, from their wounds, or in prisoner of war camps.

At the end of the war, they received no government pensions or benefits and could not take advantage of the GI Bill. Celebrations for returning heroes usually overlooked them. Only in 1988 were seamen of the Merchant Marine granted the same benefits as other veterans. By then, fewer than half the men who had served on Liberty ships were still alive.

On April 16, 1942, a German submarine surfaced near the SS Alcoa Guide off the coast of Cape Hatteras, North Carolina, and opened fire with its deck gun. Unarmed and without an escort, the ship sank in two hours. But Junior Engineer Waldemar Semenov and 26 of his shipmates survived. In two lifeboats, the men drifted for three days until they were spotted by a search plane. The next day, the USS Broome, a Navy destroyer, picked them up. Semenov’s ordeal didn’t drive him from the sea. He continued to work as a merchant seaman until his retirement in 1987. 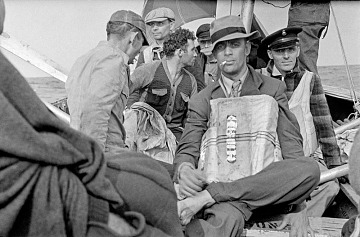 Twenty-eight-year-old Semenov did not panic as his ship came under fire. Before climbing into a lifeboat, he went below, grabbed his camera, and changed into a suit he had recently bought in New York. One of his shipmates took this photograph of Semenov in his suit. 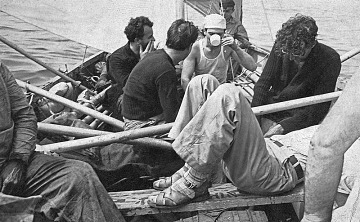 While passing the time at sea, Semenov took pictures of the survivors in his lifeboat. 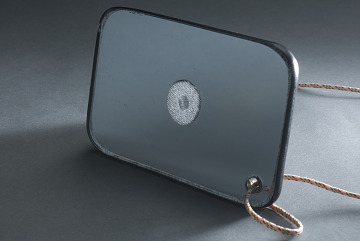 Signal mirrors were standard equipment for seamen on Liberty ships in case they were stranded at sea. Part of the instructions read: “Even though no aircraft or ships are in sight, continue sweeping the horizon. Mirror flashes may be seen for many miles, even in hazy weather.” 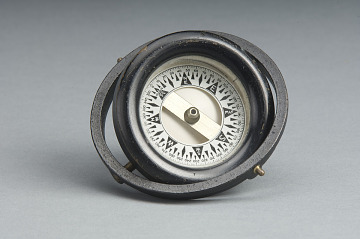 Junior engineer Waldemar Semenov and his shipmates used this compass to guide their lifeboat toward Florida after a German submarine sank their ship in the Atlantic, April 1942.

‹ Merchant Mariners up In their own words ›