What Happened to Columbia River Salmon?

In the mid-1800s, stocks of salmon on the Columbia River began to diminish quickly. Scientists advocated a hatchery program in the 1870s, but the dwindling salmon runs were not solely due to too many fishermen and too few fish.

As the region grew, spawning areas upstream were affected by mining, agriculture, logging, urbanization, and industry. Hydroelectric dams on the river provided power to vast areas of the American West at the price of disrupting annual migrations of fish. Most of the Pacific wild salmon available in the United States today are from Alaska.

At the turn of the 21st century, fishing on the Columbia River was commemorated by fishermen, their families, and communities. 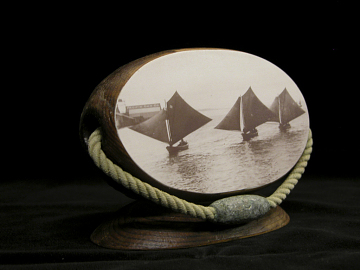 Astoria native Frankye Thompson made this object to call attention to her community’s past. The photo shows the fleet of sailing gillnetters around the turn of the 20th century. Called the “Butterfly Fleet” by Astorians, these vessels symbolize the town’s fishing heritage. The photo is mounted on half of a cedar net float. Ms. Thompson makes souvenirs from surplus floats for the growing tourist trade. 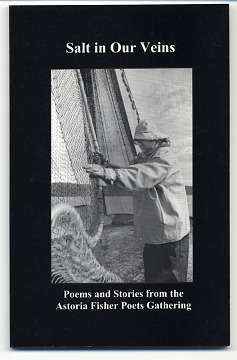 In 1997 a group of poets, writers, teachers, and artists organized the first Fisher Poets gathering. Modeled after the annual Cowboy Poetry Festival in Elko, Nevada, the Fisher Poets event is held every February in Astoria, Oregon, and features readings, music, art, and camaraderie dedicated to fish and the fishing life. This flyer, button, and booklet are from the 2005 gathering at the Wet Dog Café in downtown Astoria. 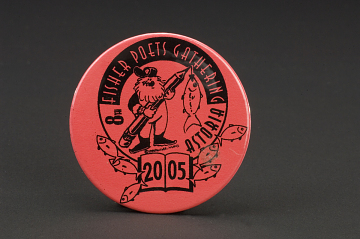 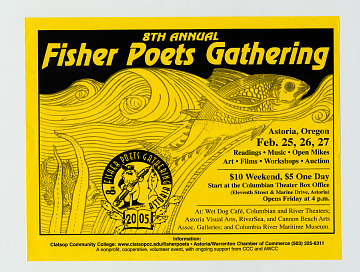