Passing the Time at Sea

During their idle hours, whalemen produced scrimshaw for family members, sweethearts, and friends. Scrimshaw refers to decorative and utilitarian objects carved from bone, ivory teeth, and baleen, and to designs engraved on the same materials.

Some whalemen sketched their designs freehand, but more often they copied or traced drawings from popular publications. The subjects often included whaling ships and details of the whale hunt, racy images of women, patriotic motifs, and idealized images of home and family. 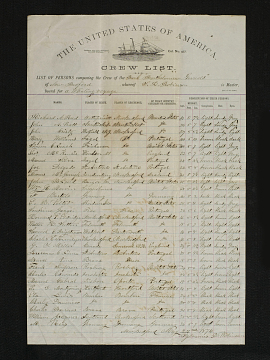 Every voyage began with assembling a crew. In May 1876, the small 106-foot bark Bartholomew Gosnold signed a crew of 31 men for its next voyage from New Bedford. Less than half were from the United States; the rest were from Portugal, England, Ireland, Germany, France, and Scotland; two were listed as blacks. The oldest crewman was in his forties; the youngest was sixteen. 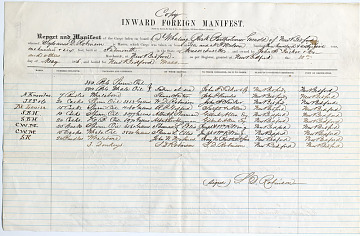 Manifest for the Bartholomew Gosnold, 1880

The Bartholomew Gosnold returned home to New Bedford in June 1880, just over four years after it left. Its cargo was sworn to include 1,260 barrels of whale and sperm oil; 95 casks of sperm, whale, and humpback oil totaling 26,742 gallons; and 27 bundles of whalebone, for a profitable voyage. 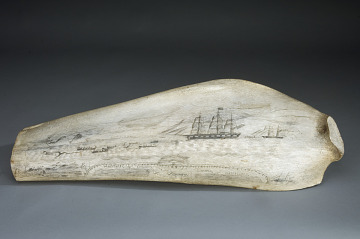 Gift of Joseph B. Bloss

This panbone, part of a sperm whale’s jaw, served as a sailor’s canvas. He drew a busy whale hunt—seven whaleboats chasing a pod of whales. The background depicts the coast of Ternate, one of the Spice Islands in Indonesia. 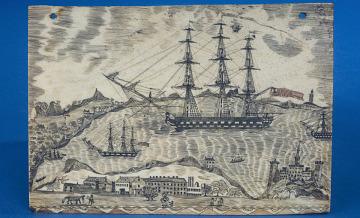 This freehand sketch of an imaginary port scene includes a warship, a lighthouse, a military camp, and even a turreted medieval castle. 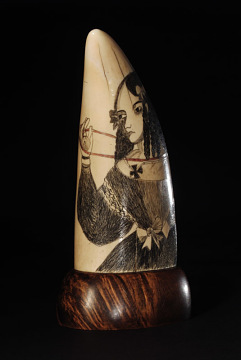 Women and ships were the most popular subjects for scrimshaw carved by crewmen on whaling voyages. In this example, a young lady, possibly in mourning dress, gazes longingly at an open locket containing a picture of a young man. 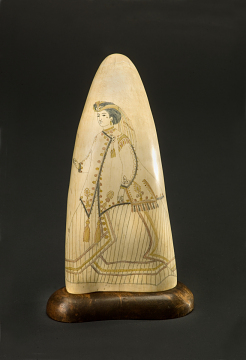 Even whalemen with little or no artistic talent could carve highly detailed scenes like this with the pinprick technique. A picture cut from a magazine was pasted or dampened and wrapped on the polished surface of a sperm whale’s tooth. The whaler pushed a sharp pin through the lines of the image, then removed it, leaving the dots on the surface. He engraved the picture by connecting the dots and rubbing black soot or colored pigments into the lines. 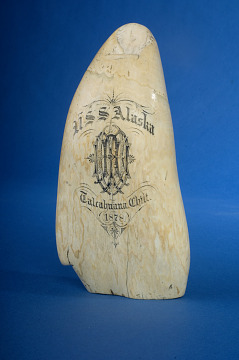 This massive tooth of a sperm whale records the visit of the sloop of war USS Alaska to Talcahuano, Chile, in September 1878. Fifty-four of Alaska’s crew went absent without leave, and three more were confined to leg irons and handcuffs for their behavior on shore. 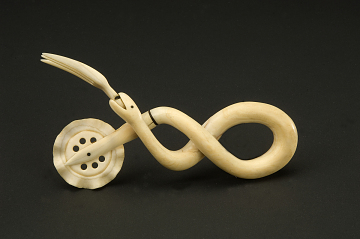 Pie crimpers, or jagging wheels, were common scrimshaw items made by American whalemen. The fluted wheel was used to cut dough or seal the top of a piecrust. 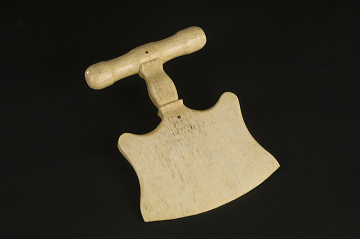 This food chopper, or mincer, was carved in two pieces from the jawbone of a sperm whale. The blunt, curved blade was used to chop soft foods such as bread dough, fruits, sausage, and animal fats. 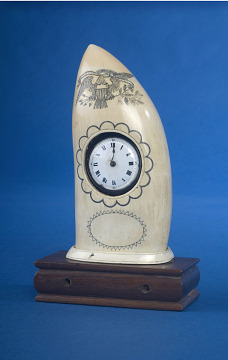 This unfinished tooth is hollowed out from the back to hold a gentleman’s pocket watch. 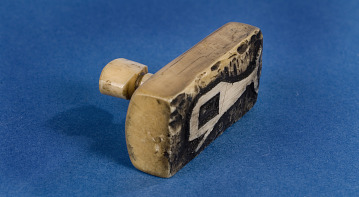 Carved from the teeth of sperm whales, whale stamps were used to record types of whales and the number of barrels of oil rendered from them. The stamps were inked into a whaleship’s log, with an empty space for writing in the number. This stamp is carved in the shape of a sperm whale. 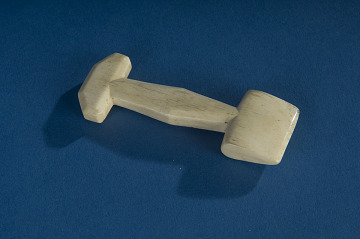 Seam rubbers were part of a sailmaker’s tool kit. They were used to smooth and flatten the seams of heavy canvas sailcloth. This example was probably carved from the panbone, part of a whale’s jaw. 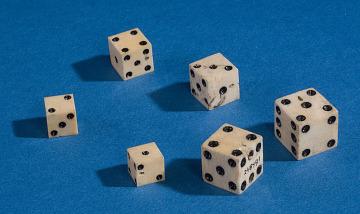 Gambling was banned aboard some whaling ships because it caused too much strife among the crew. But “bones,” or dice, were easily concealed, and crews found out-of-the way places to spend their free time wagering their earnings, tobacco, or other assets. 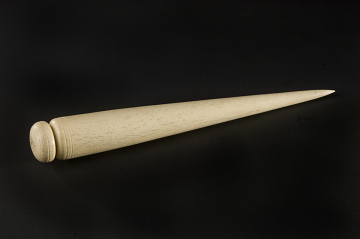 Gift of A. R. Crittenden

Made of hard wood, bone, or ivory and tapering to a point, fids were tools used for ropework, such as splicing rope or breaking knots that froze from overtightening or wet weather. In a pinch, they served as temporary belaying pins to tie off a line or even as weapons. 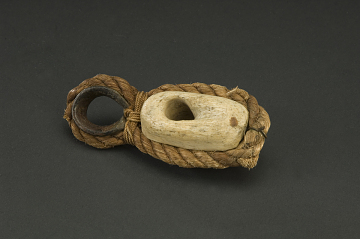 This rope-strapped thimble carved from whalebone would have had a light rope through the eye for rigging, perhaps on a whaleboat. These miniature items also served as children’s toys or curiosities back home, reminding families of their connections to the sea. 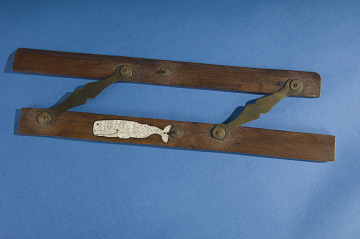 Part of the navigator’s tool kit, parallel rules were used to transfer compass points, course lines, and other directional information across nautical charts. This wooden set has a carved ivory whale inlaid into its surface, with a brass tack for the whale’s eye. 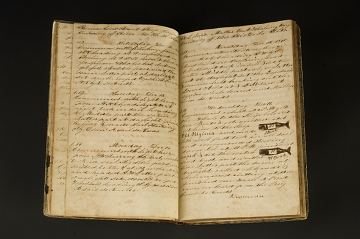 This logbook chronicles the Virginia’s voyage through the Pacific whaling grounds. The December 16 entry tells the story of two whales that were caught and processed. The figures inside the whale stamps show the barrels of oil taken from each whale. The last word, “Amanda,” reveals the writer’s homesickness. Her name appears often, as do the words “home sweet home.” 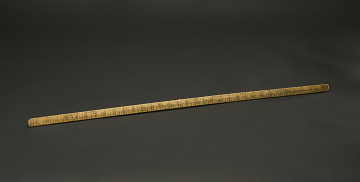 Straight edges or rulers, were used aboard whale ships as writing guides in the unlined pages of journals and logbooks. The back side of this long stick is marked in 2-1/4, 4-1/2 and 9-inch sections. The ship’s cooper may have used the ruler to measure the level of liquid in his wooden casks.