Incidents of a Voyage from New York to California
and the Gold regions. Via Cape Horn in the year Eighteen Hundred
& Forty-Nine, by Alex Van Valen, Mathew Van Siclan, Stephen
P. Clarke, William Byxber, & Rich c J. Paulison all of the
City of New York. It may not be amiss here to state the
cause, and organisation of the above named Company.
about the close of the year Eighteen Hundred & Forty Eight
numerous paragraphs appeared in the different
newspapers & journals published in the City, giving
glowing accounts of the larger quantities of Gold obtained
in California, which were corroborated by many Private
communications. the excitement became intense
and the Gold Fever as it was called, carried many a
deluded wretch away from his family, friends, and
sometimes a profitable employment. at first it was
considered a delusion, but soon however from accounts
almost daily received, and also government dispatches soon
satisfied the Poeple that it was no longer a Humbug, and
numerous Companys were organising in diferents parts
of the Country, and Vessels freighted with Provisions, tools
and all the neccessarys for a long Voyage to California
were almost a daily occurrence. The above named
persons were selected and they through the aid of
Mess Henry Akin & B S Clark of the City of New York
as Capitalists, formed themselves into a Company
under the name and title of the “California Mutual
Gold Mining Company.” the result of which will
be shown hereafter Monday Jany 22ts, 1849
Left the Port of New York in Bark Hersilia
Capt Baxter, with 84 passengers & Crew Bound for San
Francisco Cala. 9 am left Pier 6 North River in Tow of
the Steam Boat Suffolk. proceeded down the Bay
in fine Style, when off Staten Island received a Salut
of 6 guns, from the Shore, which was returned
with hearty cheers from the Ship, when off Sandy
Hook, after bidding farewell to our friends
Accompanied us with the Steam Boat. the line was
off. our Sails Sett, and we proceeded on our Voyage with
a light Wind from the North West. half past 3 P.M lost sight
of the Highlands of the Neversink in New Jersey, which
is the last point of Land visible to Vessels going to Sea

James Marshall found this tiny piece of pure gold in the tailrace of John Sutter’s Coloma, California, sawmill on January 24, 1848. This is the actual nugget that sparked the rush for California gold.

Courtesy of the Sacramento Archives and Museum Collection Center 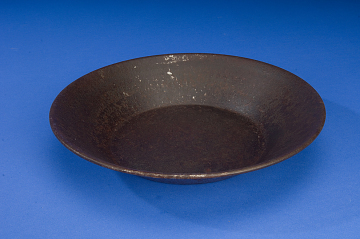 The most basic tool in any gold miner’s kit was a pan. A handful or two of sandy river gravel was dumped into some water, and the mix was swished around. The lighter sand and gravel rose to the top; the heavier gold flakes and nuggets sank to the bottom, where they could be picked out.