The “Murmansk Run” refers to the shipping route used by the Allies during World War II to deliver supplies to the Russian front. The route stretched from ports in North America and Great Britain around Iceland and through the Arctic waters of the Barents Sea to the Russian ports of Murmansk and Archangel. These merchant ships, carrying machinery, equipment, ammunition, food, and supplies for the defense of Russia, were vulnerable to attack by German U-boats (submarines) patrolling the waters of the North Atlantic.

The merchant ships traveled in convoys with protection from armed escort vessels. Convoys bound for the Soviet Union were named PQ; those returning were designated QP. Listen to Alan Harvie and John “Sarge” Ransome as they recount their perilous experiences aboard the SS Honomu sailing in the PQ 17 Convoy on the Murmansk Run. 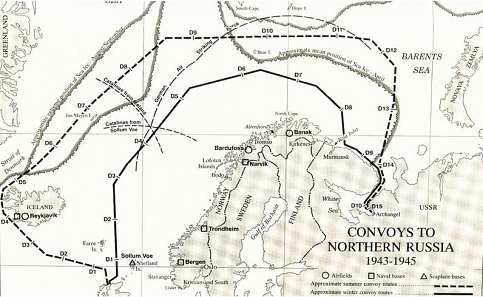 The route to Murmansk taken by Allied convoys during World War II.

Sailor’s Pants Blown Off in Attack on Convoy 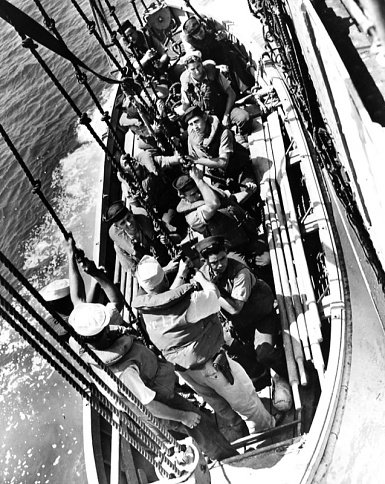 Lifeboat drills were an essential part of training for the Merchant Marine. This drill was conducted in calm waters under sunny skies. These were rarely the conditions faced by the seamen who manned the lifeboats while under attack.